On putting together an item on mid 17th century stockings I went through a load of books and articles and a load of sites. These are some of the best sites I know.
The website of the Knitting History Forum. The forum holds a study day in London in November each year. It has its origins in the Early (pre 1600) Knitting History Group formed by Montse Stanley in the 1990s. I remember going to an early meeting at UCL and thinking myself way out of my depth as I was with a group of very eminent costume historians. It now has a much wider membership and remit and an online Yahoo group at Knitting History Yahoo group
Another Yahoo group is Historic Knit This group has a larger and more American membership than the Knitting History Forum, and has many re-enactment members. The files held on the site include patterns which endeavour to reconstruct the Elenora de Toledo (1562) stockings, and provide a usable version of the 1655 Natura Extenterata pattern. There are also lots of photographs on the site. istoric Knit 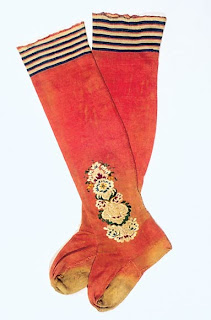 The website of the Deutsches Strumpfmuseum (German Stocking Museum) Covers the whole history of hose and stockings. There are technical pages showing machines, and history pages showing surviving examples, such as the 17th stockings shown here. However many of the illustrations of costume in the timeline look as though they have been taken from 19th century prints.
Knitting Together, A website covering the history of the East Midlands knitting industry, but the earliest stocking example in the virtual museum dates from c.1700.
Maria Riley’s Notes on 18th century stockings is very useful for re-enactors. Go to her chart to work out how to knit a pair of stockings to fit you.
The University of Southampton has a wide collection of knitting history materials having been the recipient of both Montse Stanley’s and Richard Rutt’s collections. Some of Rutt’s 19th century knitting manuals have been digitised and are now available online. They also run a conference in September called In the Loop, the third in the series will be held 5-7 September 2012
The Medieval and Renaissance Material Culture website run by Karen Larsdatter has a Hosiery page bringing together images of hose from the 12th to 16th centuries
Posted by Pat Poppy at 21:57