Shoehorns are something I had never really thought about until I went to the Painted Pomp exhibition at the Holburne Museum, Bath and saw a 1598 engraved shoehorn, isn’t it nice when makers put dates on things.


So how old are shoehorns? According to collector Sue Brandon a 'schoying horne' was first mentioned in the fifteenth century. Fitzherbert’s Book of Husbandry 1523–34 speaks of “Shoyng horne, boget, and shoes”, a boget is a pouch, bag or wallet usually of leather. Elizabeth I purchased eighteen shoehorns from her shoemaker Garrett Johnson six in1563, six in 1564 and a further six in 1566. , She also ordered steel shoehorns from the blacksmiths Gilbert Polson and Richard Jeffrey in 1567. She did not order any further shoehorns until 1586.


The shoehorn in the Painted Pomp exhibition is absolutely the same shape as most modern shoehorns, and was made by a man named Robert Mindum who, according to the details given by the museum caption, made eighteen surviving shoehorns and was active between 1593 and 1613. A short notice about Mindum’s shoehorns by Joan Evans appeared in a 1944 edition of the Burlington Magazine and is available online here.


The example in the exhibition has an inscription around the outer edge which reads: - THIS IS AMBRES BVCKELS SHOING HORN MADE BY ROBERT MINDVM ANNO DOMINI 1598. The shoehorn has feathers engraved at the top, a crown and rose in the middle and a shell pattern at the bottom. In this it is very similar to other designs by him.


I’m sure there are others but, apart from the horn in the exhibition, the following horns survive by Mindum and have images on the internet:


A 1593 example in the Salisbury Museum, made for Jane Ayers


A 1597 example that was sold at Christie’s in 2005, no details are given except for the price it fetched.


A 1600 one on loan to the V&A from the Museum of London which says ‘THIS IS MATHEW WESTFELDES SHOOING HORNE MAD BY TH...ES OF ROBART MINDVM ANNO DOMINI 1600’ The V&A site does not have a photograph, and I can’t find it on the MoL site.


A 1604 example in the Smithsonian, the top is broken so the first name of the person it was made for is missing, it says it is for ...s Gamlet.


A 1612example from the Worshipful Companyof Horners collection, now in the Museum of Design In Plastics in Bournemouth, made for Ricard Gibon. This is a brilliant set of photographs showing the shoehorn from all angles, including the underside.


Another 1612 example, the details here are from a Cora Ginsburg catalogue, it was made for Mistris Blake. This was sold by Rowley’s Auctions in 2010 for £8,800. 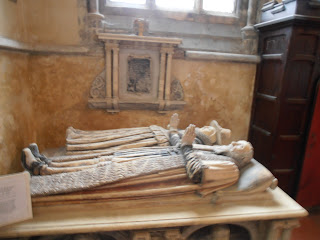 I recently went to St Nicholas church in Gloucester and took photographs of the Walton tomb, which is in a side chapel, the chantry of St Mary. The tomb dates from the 1620s and depicts effigies of John Walton an alderman and goldsmith of Gloucester (died 1626) and his wife Alice (died 1620). The sides of the tomb depict kneeling two figures assumed to be a son and daughter of the couple. 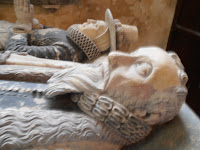 Alice wears a hat very similar to one in the collection of the Museum of London (MoL), which unfortunately does not appear to be on their online catalogue. Five similar style hats are listed in Halls catalogue, and one of these, made of black velvet appears in Arnold , though the patterns given in that book are from similar hats in the Germanisches Nationalmuseum Nurnberg. The black velvet hat in MoL, which is in the same material as a man’s suit in the collection, and the brown silk hat in Arnold, have pronounced folds, which are similar to those seen on the effigy. The hat has a somewhat squarer shape than that being worn by Anne of Denmark, wife of James VI, in a 1617 painting by Paul van Somers, but both have the large hatband. In the case of Alice it looks as though it is a roll of fabric which has been whipped round with a cord. Under the hat Alice wears a coif. Her husband is bareheaded. 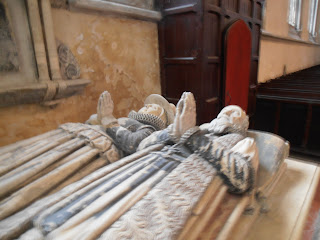 Alice wears a close fitting bodice/jacket still showing some of the original paint, and very similar in style to that worn by Lady Martha Suckling (d. 1617) and her daughters on her tomb in Norwich, which can be seen here. The jacket has wings at the shoulder and a tight curving sleeve, like this unstructured jacket of the same date in the collection at the Victoria and Albert Museum. She has ruffs at her neck and cuffs. Like Martha Suckling she is wearing a skirt which has been pinned up as though to go over a farthingale, though she does not appear to be wearing one, she may be wearing a bum roll instead. The pinning of the skirt does not appear to be as ornate as for a skirt that goes over a French farthingale, as has been described by Arnold , and is like the pinning of the skirt in a portrait suspected of being Alice Spencer, Countess of Derby.


John wears a doublet and breeches with canions, similar in style to this more ornate suit of doublet and breeches with canions in the Victoria and Albert Museum dated to around 1618, and believed to be the suit that appears in a portrait by Mytens, supposedly of Richard Cotton. The painting was sold in 1961 and its current whereabouts are unknown.. A pattern for the V&A suit is printed in both Waugh and Arnold . 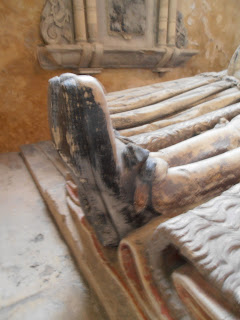 Over his suit John is wearing a gown. By the 1620s gowns were old fashioned being associated with the elderly, the professions, officials and academics.  Mytens portrait of the Earl of Arundel painted in 1618 shows him wearing a gown which, like John Walton’s, is furred at the front.  Arundel was a patron of artists and a collector of antiquities, which maybe why he is painted in a gown, a precursor of the eighteenth century comment that, “Studious men are always painted in gowns.” . For John Walton however the gown probably helps to signify his position as an alderman of the town, he became an alderman in 1621 and died in 1626. There is a painting supposedly of John Faulkner, mayor of Gloucester in a very similar outfit, however John Faulkner died in 1545 and would not have worn a ruff such as that in the portrait, which is obviously later. Tittler has dated the portrait to c.1600-1620, which seems more likely. In the painting Faulkner wears a red robe, and traces of red paint can still be seen on John Walton’s robe. John Earle speaking about a London alderman in 1628 says “his scarlet gowne is a monument, and it lasts from generation to generation.”
John wears open sided latchet shoes with the slightly wedged heel that was popular in the first decade or two of the seventeenth century, similar to those that can be seen in this full length portrait of James I by de Critz. (Cunnington 1972) 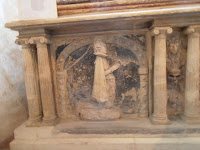 The young kneeling man on the side of the tomb is in more fashionable garb and wears a rebato, rather than a ruff, at his neck.  A more elaborate version of the rebato can be seen being worn by the 1st Earl of Carlisle in a portrait of 1628. Examples of several rebato, with patterns are given in Arnold


The young woman kneeling on the side of the tomb, wears a coif on her head, which is similar to some shown in Arnold (2008). She has a ruff at her neck, but she has turnback cuffs, and a wing at the top of her sleeve. 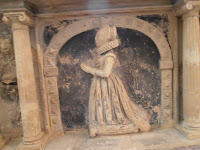 The production of a tomb of this quality for a town alderman and his wife is indicative of the rise of an urban elite and middle class, who also turned to portraiture to depict themselves. This desire of the newly wealthy to pay for portraits and tombs has recently been discussed in books by Cooper , and Tittler