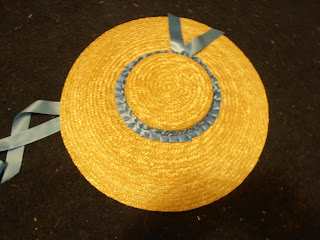 The eighteenth century saw an enormous expansion in the straw hat industry both in Britain, and Europe. Britain was importing 2 million straw hats a year, mainly from Italy and, because these were shipped through the port of Leghorn (Livorno), they became known as Leghorn hats.
One of the comments Veronica made was that she had probably spoiled historic film dramas for us by pointing out that the mottled straw used nowadays is very easily discerned and comes from China. My own thought is that on my reproduction of an 18th century hat the most obvious thing to me, is that the plait has been machine stitched. Ah well.
Posted by Pat Poppy at 21:29 2 comments: 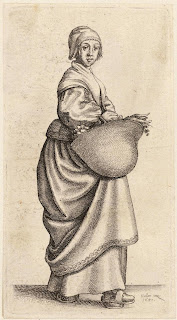 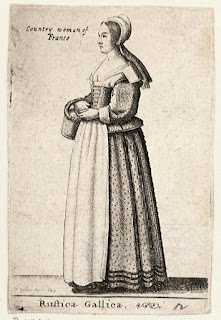 Theatrum Mulierum and Aula Veneris
These are later plates done when Hollar was in Europe, dated mainly between 1644 and 1649, showing the costume of women from various countries, and they have an incredibly complex publishing history. These plates do have titles in Latin, so for example Civis Norimbergensis Vxor  is a citizen’s wife of Nuremberg, and  Mulier Sueuica Inferioris Conditionsis is a lower class Swedish woman. Illustrated here is his French countrywoman.
The Toronto Collection contains many other of works, including his landscapes, architectural drawings, maps and a lovely collection of sporting prints. It is well worth a visit.
Much of the information above has come from Richard Pennington, A Descriptive Catalogue of the Etched Work of Wenceslaus Hollar 1607-1677 (Cambridge, 1982), a catalogue raisonné of Hollar’s work.
Posted by Pat Poppy at 19:18 No comments:

Yesterday I spent the day in Bath for the WECS study day the Dress of Ordinary People. The first speaker Barbara Painter explained the work and thought behind dressing the interpreters at the Weald and Downland Museum in the clothing of the 1620s and 1630s to fit with the two houses they are interpreting. The clothes have all been made by volunteers under the direction of Barbara, much of the cloth is also dyed on the site and the stockings knitted from wool spun on the site. Second speaker was Rachel Worth on rural dress in the novels of Thomas Hardy, interesting was his comment on the change in rural towns in the second half of the nineteenth century from the white and drab of the smock frock of the labourers to the grey and black of off the peg town suits, a visible sign of a changing life style. Our third speaker was Claire Watson of the Yorkshire Fashion Archive who have collected ordinary people’s dress, mainly from the second half of the twentieth century, together with their stories about the clothing. It’s an invaluable insight into social mores, as in the lady who talking about a photograph of herself at the seaside as a child, said they wore their school uniform because it was the only smart clothing they had. Our final speaker was Jennifer Thomsom on the Hodson Shop Collection at Walsall. Flora and Edith Hodson turned the front room of their house into a drapers and dress shop in the 1920s and traded from there until the early 1970s. On Flora’s death the collection came to the museum, and on first going into the house it was discovered that the sisters had never thrown anything away. The museum has over 3,000 items dresses, blouses, underwear, stocking, haberdashery and magazines covering the whole period, there is a searchable database with about 1,000 items having photographs, online at Black County History. A good day.
Posted by Pat Poppy at 10:25 No comments:

Everyone knows, or at least has a good idea of what is meant by, colours like black, scarlet, blue, grass green, but some of the names given to colours in the Early Modern period are less obvious, isabella, carnation and aurora for example. This blog gives definitions for some of those colours that are not obvious and were listed in clothing accounts or inventories for Henry VIII, 1547(Hayward, 2007), Elizabeth I, 1601 (Arnold, 1988), the 3rd Earl of Dorset, 1617 (MacTaggart, 1980), Charles I, 1633-5 (Strong, 1980).

Aurora - a yellow with light red tones. This is a colour where the meaning has changed over time. The OED has no reference earlier than 1791, by which time it is moving far more into orange. (Lowengard, 2006)

Brazil - red. The dye was originally from an East Indian tree and well predates the discovery of South America, being referred to as early as Chaucer (OED).

Russet – both a cloth and a colour. “If you will mingle a litle portion of white with a good quantitie of redde, you may make thereof a Russet, or a sadde Browne, at your discretion.” (1573)

Tawny -brown with a preponderance of yellow or orange (OED)