The Calais Museum of Lace and Fashion

I spent last weekend in France and made a visit to the excellent Calais museum on the history of lace, the Cite Internationale de la Dentelle et de la Mode de Calais. Calais is to French lace what Nottingham is to English lace, the place that saw the mechanisation of lace-making; in fact many of the machines in the Calais museum were made in Nottingham.

The museum is extremely well laid out and easy to follow, even if you don’t speak French very well, just remember dentelle a fuseaux is bobbin lace, and dentelle a l’aiguille is needle lace, most labels are in both languages. The museum starts with two short videos, side by side, of the two techniques. The creation of a small leaf motif in needle lace is shown from start to finish, as is the creation of a narrow piece of bobbin lace.
There is some beautiful reticella work, and examples of 16th and 17th century bobbin and needle made laces. One thing I particularly liked was the way in which they placed an image of someone wearing lace with original  lace of a similar design, as in the examples I show here.
The museum concentrates on the history of lace in France, so there is much Alencon, Argentan, Chantilly, etc., but there are also Flemish and Italian laces in the collection.

Later on, when you get into the 18th century, the museum has original garments to add to the display of lace, and by the time you reach the mechanisation of lace in the 19th century they are putting together lace, clothing and illustrations from paintings, fashion magazines and photographs. The Calais lace industry supposedly started after the Napoleonic Wars, when in 1816 a Nottingham lace maker, Robert Webster, supposedly smuggled a lace machine into France. 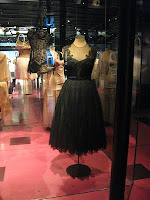 The twentieth century gallery contains a collection of both underwear, and garments that include lace in their design. The couturiers represented include Paquin, Paco Rabane, Yves St. Laurent, and many others.

﻿﻿﻿﻿﻿﻿ The way in which the machinery that produced the machine made lace is also well displayed, as can be seen in the photo. Upstairs there is a whole floor of machines five of which are in working order, and they use them to demonstrate two or three times a day. The museum is in an old lace warehouse, though you would never know it to look at the outside, which is thoroughly modern.


Finally a very Joseph Wright of Derby style photo of left to right, Ann, Garth, myself and Graham, examining a case of 17th century lace. 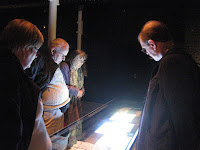 
﻿﻿﻿﻿ Two different terms are sometimes used for small sewing kits. The housewife or hussif is usually seen as a cloth container, a roll with compartments for the various tools. An etui, from the old French word meaning to keep, is by contrast a case containing small articles, not necessarily sewing tools. (OED) The term etui dates back to the seventeenth century, as does huswife. The following definition appears in Florio’s 1611 Italian-English dictionary Queen Anna's New World of Words,   “Astuccio, an estuife, a pocket cace or little sheath with cizers, bodkin, penknife..in it.” Whether this word is meant to be housewife (say estuife out loud) or etui (which is pronounced e’twee) I don’t know. The corruption of housewife to hussif has been charted, Peacock’s Glossary of words [from Lincolnshire] of 1877 has “Hussif, that is house-wife; a roll of flannel with a pin-cushion attached, used for the purpose of holding pins, needles, and thread.”
﻿

Nowadays small sewing kits can appear in your hotel room as one of the freebies, together with toiletries and mini shoe cleaning kits, the example in Figure 1 was obtained from a Novotel hotel somewhere. Small kits can also be purchased, and the small blue case in Figure 1 is one I bought, not least because the small scale of the scissors means it is acceptable to airlines. These kits always contain needles, and may contain small scissors, thimble, thread, pins, buttons, and tape measures, depending on the date of the kit and how comprehensive they are trying to be.


In the World Wars housewives were issued to soldiers by the Red Cross and others, and the Imperial War Museum has both fabric examples and leather examples. Unfortunately the Imperial War Museum does not put any dates on their records. An example of a late nineteenth century small sewing kit from my own collection is shown in Figure 2. The yellow case contains a metal needlecase, buttonhook, crochet hook, scissors, bodkins, and a thimble. I think the missing tool may have been a stiletto. Not all these tools may be original.


Like many examples this etui in the Victoria and Albert Museum, which dates from the last decades of the 17th century, survives but unfortunately has no contents. A fairly complete mid 18th century enamel English etui in the Fitzwilliam Museum contains scissors, a button hook, a bodkin, a file, a stiletto and a bodkin case.  In early usage etui could be for all sorts of tools, this mid 18th century shagreen example in the Metropolitan Museum of Art contains drawing instruments, and Figure 3 shows a gold 1570 example in the British Museum, again with drawing implements.

﻿
There is an early sewing kit from the second half of the 17th century, not in a case, which is in the Victoria and Albert Museum, who describe it as a needlecase and scissors. This is very similar to a kit, also in the shape of a small book, described by Taunton which is even smaller (5.8 x 4.5 x 3.9 cm). It contains scissors, a thimble, a notebook with a dry point writing implement, a mirror and a purse compartment, one side is padded to both contain the thimble and act as a pincushion. The V&A suggest that a skilled needlewoman might have made such a kit for herself or as a gift, but Taunton comments that that she has seen two other compendiums with similar fittings and silver mounts and apparently identical silk brocade, so she suggests some may have been made professionally. Delieb says he has seen another set which he dated to around 1640.
This article has not looked at chatelaines, or other individual articles designed to be hung for waist, perhaps on another day.
Sources and further reading
Delieb, E., 1967. Investing in silver. London: Barrie & Jenkins .
Groves, S. 1968 The history of needlework tools and accessories. London: Hamlyn
Taunton, N., 1997. Antique needlework tools and embroideries. Woodbridge: Antique Collectors Club.


﻿﻿﻿﻿﻿
There is often a general assumption that embroidery is a domestic, non-professional occupation, but in the sixteenth and seventeenth centuries much work was done by members of the Broderers Guild, which received its first charter in 1561, though it appears to have been around from a considerably earlier date. Edmund Harrison was one of the most important members of the Company which still owns the cup he gave to them, engraved with comment  “The Gift of Edmund Harrison Imbroiderer to our late Soveraigne King James deceased and unto O’Soveraigne Lord King Charles that now is 24 Janry 1628”


Edmund Harrison was born in London in 1591, the son of a merchant tailor he attended the Merchant Taylors’ School. He may have been trained by two men who were also embroiderers to the King, and his predecessors and/ or contemporaries, William Broderick (died 1620) and John Shipley (or Shepley, died 1631). Harrison continued as a King’s embroiderer until the Civil War. According to Wardle during the interregnum he traded in coal. Harrison also headed one of the consortiums at the time of the second list. This is the second list drawn up in January 1651 of “about 970 of the said creditors and servants” that is people who were owed money by the late King Charles. Harrison, who at one point is described as a wood monger, sold on about £500 worth of paintings that he had received, including two Titians and a Rubens. After the Restoration he was reinstated when the Broderers’ Guild wrote to Charles II that he was ‘the ablest worker living’, at that time he was seventy years of age. Charles II granted him £341 yearly for his living, and another £159 12s. for embroidering 250 coats for the yeomen of the chamber, yeomen waiters of the tower, yeomen of the robes and wardrobes, and 42 messengers of the chamber. When he died in 1667 he was worth about £6946 10s, his will and probate inventory are available from the National Archives.


What type of work did Harrison do?


Ceremonial : Much of Harrison’s work was ceremonial and related to the court, cloths for ceremonies of state and the state barges, banners and standards, for the orders of chivalry, and livery for the heralds, a slightly later herald's tabard is in the Philadelphia Museum of Art, while a tabard from the period, unfortunately without a colour photograph, is in the Victoria and Albert Museum. From 1627, when the Garter Star was introduced, Harrison supplied  stars of the order for cloaks and coats, 34 in 1633-34 and 40 in 1665-66, one of these stars, which may or may not be by Harrison himself, is in the Victoria and Albert Museum.


Religious: Harrison is also known to have completed altar frontals and similar both for the King and for private patrons. The Victoria and Albert Museum has in its collection both a pulpit hanging, attributed to Harrison by Wardle with arms of the Sandys of the Vyne family and dated to 1633, and an altar dossal also from the 1630s depicting the Last Supper.


Clothing: Harrison appears quite frequently in the Wardrobe accounts providing clothing for the King. One of the richest suits purchased in 1633/4 cost £226 18s 8½d, part of which went to Harrison for “embroidering the said doublet, hose and cloke, upon watched (i.e. watchet) satin wrought all over verie rich with fine needle gould, and fine twists and flagon cheines and lace purle of fine damaske gold and naple silk at being furnished by him.” Harrison also provided embroidered costume for court masques.


Embroidered pictures:  The series of embroidered pictures by Harrison, known as the Corby Castle pictures, were split up after a sale in the 1920s. They are dated to 1637 and depict the life of the Virgin. They are in a technique known as or nue, a type of goldwork where the gold threads are couched down with coloured silk threads, the density of the couching threads creating shading in the design.   Two of the pictures are in the National Museums of Scotland; one depicts the Annunciation and the other the Circumcision of Christ .  Another in the series, depicting the Adoration of the Shepherds, is in the Victoria and Albert Museum (unfortunately there is no image attached to the record).


This article is very heavily indebted to Patricia Wardle’s extensive work on Harrison, which should be read for further information on him.