Love locks and round heads 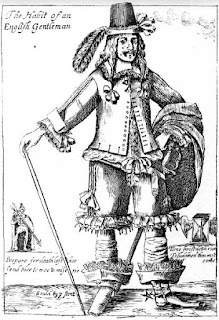 Puritans. William Prynne wrote two pamphlets on the subject, The unloveliness of lovelocks in 1628 (1) and A gagge for long hair’d rattle-heads who revile all civill round-heads in 1646 (2). Henry Peacham in the Truth of our times in 1638 spoke of the “proud coxcombe in the fashion, wearing taffeta, and an ill-favoured lock on his shoulder.” (3)

What precisely were they complaining about, well you can see a style in the caricature from around about 1650 (left). In the caricature long locks are brought forward over both shoulders and tied with a ribbon bow, this is an extreme. A single lock, as in the 1634 portrait of Henri II of Lorraine (below left -Anthony van Dyck. Henri II de Lorraine, 1634. Washington DC: National Gallery of Art), was more common, but still considered an affectation. With the single love lock style usually the hair on the left side of the head was grown long, and the right hand side was shorter. You can see this both in the Henri Lorraine portrait, and in the classic Charles I in three positions portrait, also by Van Dyck. (below right) 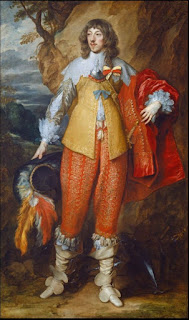 The hair could just be worn long, though for certain professions it was discouraged, clergymen with long hair were described as “appearing like ruffians in the pulpit”(4), while at Oxford University in 1636 heads of houses were admonished, “to appear nowhere abroad without their caps, and in apparel of such colour and fashion as the statute prescribed, and particularly they were not to wear long hair, nor any boots, nor double stockings rolled down or hanging loose about their legs, "as the manner of some slovens is," nor to wear their gowns hanging loosely, with their capes below their shoulders.” (5)

What constituted long hair, and does it necessarily say anything about the person wearing it? I suppose it depends on your definition of long. Prynne himself wore his hair longer than his ears, though to be fair as his ears had been cut off as a punishment, this was to hide the scars. The fashion for really short hair among the London apprentices was quite short lived. Lucy Hutchinson, even though her husband was of the Parliamentarian party, complained of those whose hair was cut “close round with so many little peaks as was ridiculous to behold” She said that her husband had “a fine thickset head of haire… although the godly of those days, when he embrac’d their party, would not allow him to be religious because his hayre was not in their cut.” (6) 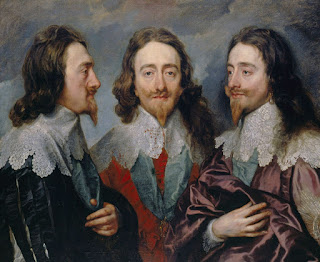 The term roundhead to indicate not simply short hair, but specially cropped hair, appears just before the outbreak of the Civil War. John Rushworth thought the first usage was in 1641, writing: “The House of Commons met on Monday Decemb. the 27th. [1641]... There being three or four Gentlemen walking near, one of them named David Hide a Reformado in the late Army against the Scots..began to bussle and said he would cut the Throat of those Round-headed Dogs that bawled against Bishops (which passionate Expressions [sic] of his, as far as I could ever learn, was the first miniting of that Term or Compellation of Round-heads, which afterwards grew so general). (7) Richard Braithwait in the same year linked the term to William Prynne writing, “Lord, with what pricked up eares, these round heads harken to their oratour Prinner and admire in hearing him.” (8) In 1642 at least four pamphlets were published using roundhead as a pejorative term. (9)

By the time in 1646 that Prynne wrote his “A Gagge”, wigs, that would be worn by men for the next 150 years, were beginning to make their appearance, for as he pointed out, when “peri-wigs at bed time are laid by” their owners are themselves roundheads. (2)

1.      Prynne, W. (1628). The Unlovelinesse of Love-Lockes; or, a Summarie discourse, prooving the wearing and nourishing of a locke or love-locke, to be altogether unseemely and unlawfull unto Christians.

4.      Hall, T. (1654). Comarum akosmia. The loathsomnesse of long haire: Or, A treatise wherein you have the question stated, : Many arguments against it produc'd, and the most materiall arguguments sic for it refell'd and answer'd, with the concurrent judgement of divines bot. Printed by J. Grismond. for Nathanael Webb and William Grantham at the signe of the Bear in S. Pauls Church-yard near the little north door.

6.      Hutchinson, L. (1806) Memoirs of the Life of Colonel Hutchinson, now first published from the original manuscript by the Rev. Julius Hutchinson. London: Printed for Longman, Hurst, Rees, and Orme, by T. Bensley