The Exchanges - Royal and New

Shopping, for the fashionable when in London, meant a visit to either the Royal Exchange or the New Exchange. The Royal Exchange was built in 1567 by Thomas Gresham, and officially opened on 23 January 1571 by Elizabeth I, who allowed the building its royal title.  The New Exchange was built by Sir Robert Cecil, and was opened by James I on 11 April 1609. The shops of both included many that catered for fashion requirements of the elite.

The Royal Exchange was colonnaded, with around 120 shops on the ground and first floors, they surrounded an open courtyard, as can be seen in the engraving by Hollar. The original Royal Exchange burnt down in the 1666 Great Fire of London, though it was immediately rebuilt, Pepys records going to see the first stone laid on 23 October 1667. (Saunders, 1997) The New Exchange was built as competition for the Royal, and was situated on the Strand, outside the walls of the City of London. It was very similar in style to the Royal and had about one hundred shops. On visiting London Grand Duke Cosmo of Tuscany wrote of the New Exchange. “It contains two long and double galleries, one above the other, in which are distributed in several rows great numbers of very rich shops of drapers and mercers filled with goods of every kind, and with manufactures of the most beautiful description. These are for the most part under the care of well-dressed women, who are busily employed in work, although many are served by young men called apprentices.” (Cosimo III Grand Duke, 1823)

The shops were quite small, and similar to those that can be seen in Abraham Bosse's engraving of the Parisian equivalent, the Palais Royale (below). Here are three shops side by side, on the left a book shop, in the centre a shop selling fans and gloves, and on the right a shop selling rebatos, bands and cuffs.

The range of goods that could be bought was extensive. Pepys often records shopping at the exchanges. At the New on 10th April 1663 “There laid out 10s. upon pendents and painted leather gloves, very pretty and all the mode.” 20th December 1665 at the Royal “laying out a little money there for two pair of thread stockings, cost 8s.” He also bought prints, plays and books at the Exchanges. In 1663 Pepys looked for some lace at the Royal but instead bought from “the great laceman in Cheapside, and bought one cost me 4l. more by 20s. than I intended, but when I came to see them I was resolved to buy one worth wearing with credit, and so to the New Exchange, and there put it to making,” which indicates that he could have stuff made up at the Exchanges. The household accounts of the Earl and Countess of Bath indicate that they also shopped at the exchanges. In 1646, as the first part of the English Civil War was coming to an end the accounts record “to Mr Bayles in the New Exchange for gloves 18s”, and later the same year, “for handkerchief, band and cuffs welted in the Old [Royal] Exchange 12s” (Gray, 1996)

Drawers, in the sense of underwear, are usually something that is associated with nineteenth century women, but the term is much older dating back to the sixteenth century. In the seventeenth century drawers are rarely associated with women, except for the occasional example, for instance Pepys’ wife. When Pepys thought his wife was having an affair he would check to see if she was wearing drawers, he wrote 4th June 1663 “I did so watch to see my wife put on drawers, which poor soul she did.” Elizabeth Pepys was the daughter of Alexandre de St. Michel, a French protestant convert, and drawers for women were commoner in France. (Cunnington & Cunnington, 1951) 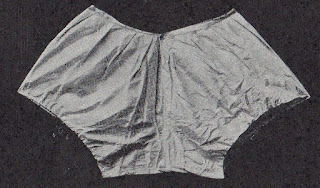 Drawers for men seem to have come in two types. Short, as in Cotgrave’s definition of the older word brayes, “Brayes, short (and close) breeches, drawers, or vnderhose, of linnen, &c.” (Cotgrave, 1611) These are the type that survive on the effigy of Charles II at Westminster Abbey, the image right is the only one I can find of these and if from Cunnington.(1951) and are the type Pepys wrote about when saying that the pressed men in the navy had “want of clothes” and there was a need to “to provide them shirts and stockings and drawers.” (10th July 1666). The other style was longer, Cunnington quotes from 1670 “a paire of longe linen drawers to put under the breeches”, and suggests they may have had stirrups under the foot.(1951) Whether these would be the same as stirrup hose is debatable. It has been suggested by Tankard, (2020)  that what are referred to as linings, and listed separately from garments, may also be a form of drawers. These would be linings that were separate from, not actually attached to, the breeches.

The style of drawers referred to in literature are usually the shorter form, and appear in Restoration comedies, for example in Aphra Behn’s 1677 The Rover, Lucetta and Blunt have an assignation in her bedroom. Lucetta demands “Are you not undrest yet?” and Blunt replies, “As much as my Impatience will permit.” The stage direction is then [Goes towards the Bed in his Shirt and Drawers].  Steele writing about the play in 1711 complains that Behn, “Makes a Country Squire strip to his Holland Drawers.” The fabric for these drawers is usually linen, especially holland. When Pepys is worried that he and his wife have no children, he is recommended to wear “cool holland drawers” (26th July 1664) The amount of cloth needed for a pair of drawers can be seen in the Seymour accounts, where in 1641 they “paid for tenn elles of holland at vs iiiid the ell to make 6 paire drawers to my Hon. Lord,” which would imply a metre and a half each. (Morgan, 1945)

The longer style, with or without stirrups, are often worsted. In 1675 Richard Legh paid for “2 pair of large worsted drawers with stirrups,” while in 1650 the Earl of Bath paid “for 2 pair fine large worsted stirrups £1.” (Gray, 1996) These may be for winter wear, James Master often purchased drawers, when he bought “a pair woollen drawers, 4s 6d” it was in November. (Robertson, 1889)  Another material used for drawers is leather, in 1676 Samuel Jeakes spent 3s 6d on two pairs of oiled skinned drawers. (Tankard, 2020)

Drawers appear to be worn at all levels of society. King Charles I purchased 23 pairs of holland drawers at a time. (Strong, 1980) Poor law overseers could also provide drawers, in 1680 Arundel the ten-year-old orphan Luke Wareham was provided with, three shirts, two pairs of stockings, a pair of drawers and two pairs of shoes, he was provided with another pair of drawers in 1682. (Tankard, 2020) Occasionally they appear in wills and probate inventories. In 1674 John Harris, a coal miner, left his son in law “a pair of woollen drawers.” The further up the social scale the more pairs of drawers, George Stearte, a surgeon, has four pair in 1671, (George & George, 2005) and  Richard Matthew, a vicar, has five pairs in 1686 (Wyatt, 1997)

Drawers could be purchased ready made, James Claxton, had thirteen pair in stock for 2s 6d each in 1680, while five years earlier Thomas Moggs had “fifteen pair of white & blew drawers” at 1s 4d a pair, and a further three pair in blue. (George & George, 2005)


What was the Brandenburg(h) that was worn in the final quarter of the seventeenth century? We have several references to it, but no definitive description. Was it a loose coat or overcoat, as stated by Hayward (2020) and Maitra (2007) or, as the Oxford English Dictionary and the  Fop Dictionary (Evelyn, 1690) refer to it, a morning gown? It is generally though that it was large, loose and unfitted, Maitra says it was cut with the sleeves in one with the rest of the garment.

In France the term is brandebourg, and obviously both come from Brandenburg, one of seven electoral states of the Holy Roman Empire. The French believe the term came from interaction with soldiers from Brandenburg,  in the Thirty Years War (1618-48) or slightly later. While English seventeenth century references are to it as a coat or morning gown, the French describe it as “Casaque à longues manches, ornée de boutons en olive reliés par des galons,” – a casaque or cassock, with long sleeves, ornamented with olive buttons fastened with frogging. Olive buttons are long, olive shaped buttons covered with silk or braid. (Cumming, et al., 2010) By the mid eighteenth century the term Brandenburg refers only to the ornamentation, the buttons and frogging.

The first reference we have to a Brandenburg in England is in William Wycherley’s play The Plain Dealer (1674), where Oliva complains, saying that Capain Manley will make “my Chamber perfum'd with his Tarpaulin Brandenburg.” In this quote tarpaulin refers to the fact that he is a mariner. The idea of it being loose can be seen in an exchange in George Etherege’s 1676 play Man of Mode “Y' have a very fine Brandenburgh on Sir Fopling”. “It serves to wrap me up after the fatigue of a ball.” “I see you often in it.” “We should not always be in a set dress, ‘tis more en cavalier to appear now and then in a dissabillee.”

Assuming that a Brandenburg by definition is fastened with oval buttons and frogging, it may have looked like the “Polish coat” owned by Fredrik III of Denmark. This dates from 1630-40 and is described in the Rosenburg Castle’s inventory in 1666 as an underkjole (under gown) and in the 1718 inventory as Polish.(above right) It is in yellow silk damask. (Rosenburg Castle catalogue number Ka.1 31 L 1b) (Rangstrom, 2002). They could also be made from far plainer fabrics, in the Countess of Caithness accounts, she paid in1690 for one to be made of Irish frieze. (Hayward, 2020)

This style of eastern, loose fitting, coat like garment was known in the west before the term Brandenburg is used, as in the portrait of the English traveller Sir Robert Shirley (1581-1628), painted around 1627 (left). Shirley travelled mostly in Persia, but also to Poland, Lithuania, and other countries.