Stockings in the Seventeenth Century

We speak of stockings and that term was certainly used in the seventeenth century, but other terms were also being used, and as the meaning of words changed it is sometimes difficult to understand precisely what is being talked about. Hose, from which we get the term hosiery, originally referred to something that covered the entire leg. Once breeches appear the term hose can be used to indicate either the stockings or the breeches, so as late at 1647 there are references to pockets in hose. (OED, 2017) There are also references to upper stocks, meaning the breeches, and nether stocks, meaning the stockings. Knit is another complicated word, which can mean simply tied or knotted, rather than knitted; so each reference has to be looked at in context.

The history of knitting is a complex and difficult one to disentangle, not least because earlier techniques like nalebinding, a form of sewn looped textile, can be confused with knitting, but it is generally assumed it started in the middle east around 1000AD (Rutt, 1987). By the mid sixteenth century knitted hose is mentioned often and examples are found in graves all over Europe, and not just those of the upper classes, though they tend to predominate. The best known are probably the scarlet silk knitted stockings of Elenora de Toledo who died in 1562.

In sixteenth century England stockings were already being made of worsted thread as well as silk, and even Queen Elizabeth wore them, being first supplied with Norwich worsted yarn hose in 1576. When she visited Norwich in 1578 there was a pageant, and on the stage were “small women children” spinning worsted at one end of the stage with more knitting the hose at the other end. (Arnold, 1988). By 1583 when Philip Stubbs published his Anatomy of Abuses, he was complaining that, “every one almost, though otherwise very poor, having scarce forty shillings of wages by the year will not stick to have two or three pair of these silk nether stocks, or else of the finest Yarn”. This is obviously an exaggeration, but it points to how common knitted stockings were becoming.

The price of stockings varied considerably depending on the quality of the yarn, and also on the complexity of the pattern and decoration. Thirsk (1973) states a Kirby Lonsdale stocking dealer in 1578 had stockings valued between 7d and 22d a pair, while over a hundred year later in 1692 chapman Ann Clarke had stockings between 6d and 26d a pair (Spufford, 1984). These are, for want of a better term, working class stockings. Silk stockings were considerably more expensive; in 1647 James Master paid 19 shillings for green silk stockings  (Dalison, 1883 ). Interestingly it is not always the cheapest stockings that are given to the poor. In 1649-50 clothing given to the poor of St Giles, Cripplegate, London included a total of 60 pairs of stockings at 22d the pair (Saunders, 2006). The stockings for the New Model Army varied in price from 12d to 22d a pair depending on the contract. (Mungeam, 1969)

People might own both knit and cloth hose, for example the list of clothing given to a servant between 1580 and 1610 includes both “for knitting a pair of woollen hose for her 4d” and “for two pair of hose for her of the defendant’s own cloth.” (Anthony, 1980) Stubbs lists knitted stockings as being of “jarnsey (jersey), worsted, crewel, silk, thread and such like.” (Stubbes, 1583) Cloth hose could involve a wider variety of fabric; linen, worsted, fustian, kersey, silk and satin are all mentioned at various times. The Victoria and Albert Museum has a pair seventeenth century linen cloth hose with a simple embroidery around the triangular gusset at the ankle (this area is known as the clock), and up the rear seam. Because linen has less give than other fabrics, they are tightened at the ankle by lacing through fourteen pairs of eyelet holes. (Rothstein, 1984) In one six month period in 1635 King Charles received 24 pairs of fine linen boothose with welted tops, and 40 pairs of grey boothose, with no fabric specified. (Strong, 1980) Irish cloth stockings were particularly prized for their hardwearing qualities, and were recommended for those emigrating to the New World. William Wood in 1639 advised intending settlers that they were, “much more serviceable than knit ones”. (Poppy, 2003)

Subbs says that knit stockings where, “green, red, white, tawny and else what.” (Stubbes, 1583) In an inventory of 1619 the Earl of Dorset has stockings in black, white, green, purple, tawny, yellow, murrey, grass green, crimson, pearl and watchet (a greeny-blue), often the colour matched that of his suit. (MacTaggart, 1980) On the other hand poor children at Beecles in the 1630s were being issued with grey knitted hose. (Spufford, 1984)The fragments of whalers stockings found in graves dating from c.1614 to c.1660 at Smeerenburg contain blue, red, green and black. (Vons-Comis, 1987)

From quite early on the patterns of knitted stockings could be quite complex. The 1562 Eleonora de Toledo stockings have a complex  pattern consisting of panels of double moss stitch and double garter stitch separated by narrow stripes of reversed stocking stitch and a central wale, the tops have a lozenge pattern, each diamond containing four eyelets, with a zigzag of purl to their top and bottom. (Orsi Landini, 1993). As well as decoration in the knitting itself the stockings could also be embroidered. The stockings in the grave of a daughter of Christian IV of Denmark, who died in 1628, were embroidered with metal threads on the outside of the stocking. The pattern over the cloaks shows a peacock with an outspread tail above a five petalled flower, the stalk of which continues down the foot with leaves and flower buds. (Ostergard, 1988)
Many knitted stockings, plain and patterned, had a false seam at the back, this could be made simply by knitting a purl stitch at the end of every round, though this is not always the case. The false seam could sometimes be quite complex in design. A seaman from the Spitsbergen burials wears two stockings which do not form a pair, one has a false seam, the other does not. (Vons-Comis, 1988)
Cloth hose could also be heavily embroidered. The embroidery was either around the clocks for stockings to be worn with shoes, or at the top for boothose. An example is the surviving linen boothose supposedly worn by Gustavus Adolphus of Sweden at the Battle of Lutzen in 1632, the tops have an elaborate pattern of cornucopia, flowers and birds done in black silk and gold thread. (Rangstrom, 2002)

Make do and Mend

At all levels of society and for all types of stockings, darns, patches and repairs were made. By 1599 an English to Spanish language book has the phrase “Looke well to see if the stockings have any stitches broken in them.” (Minsheu, 1599) Queen Elizabeth’s accounts have references to “lengthening of a payer of white silk hose at the tooes with silke” and for “lengthenynge of a payer of silke knit hose in the feet and toppes.” (Arnold, 1988) The stockings of the Spitsbergen whaler were both darned especially at the knees, and both stockings are so patched under the foot it is impossible to see the original construction. (Vons-Comis, 1988) With the Gunnister stockings from a burial in Shetland at the end of the seventeenth century, both feet have been replaced, one with part of the leg of another stocking and the other with coarsely woven cloth. (Henshall, 1951-2)

The earliest pattern for knitting stockings was published in Natura Exenterata in 1655, as Rutt (1987) says it is imcomplete and hard to follow, being three pages long written in a single sentence. Rutt has modernised the spelling and punctuated it, however it is still imcomplete as it stops just before the toe. Several costume historians and re-enactors have tried to create useable variations of this pattern and others, you can find these patterns online. Paterns for cloth hose change little, so they can be adapted from the patterns that appear in Thursfield (2001) and Mikhaila. (2006) 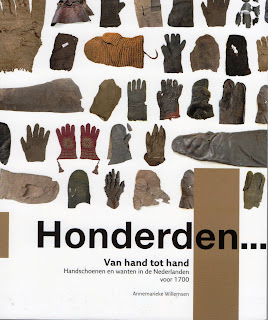 Hundreds  ... hand to hand: gloves and mittens in the Netherlands before 1700

The first thing to say about this excellent book is that the text is entirely in Dutch, the second is that it is extremely well illustrated. The author, Annemarieke Willemsen, has brought together both information on gloves that have been found in an archaeological context in the Netherlands, and gloves that have survived, with illustrations of gloves in paintings, drawings, manuscripts etc.

The chapters are themed mainly by glove usage, so you have chapters on warm woollen mittens, leather work gloves, luxury leather gloves, military gloves and gloves for sports and games. There is also discussion of gloves as a symbol of dignity by clerics and royalty, and the giving of gloves as gifts.

Well worth the money – even if you don’t speak Dutch
Posted by Pat Poppy at 17:38 No comments: