The wearing of something on the head, be it a hat or a cap, was common at all times. Hat honour, the question of when, and where, and in what circumstances you take off your hat, was of particular importance to men. The classic article on this subject, now more than twenty years old, is by Corfield (1989). Corfield describes the case of an oatmeal maker brought before the Court of High Commission in 1630 for preaching. His political beliefs are summed up in his use of his hat. He kept his hat on before the High Commission and was asked why he did not take it off. He explained that he would never take his hat off to Bishops. It was pointed out that the gentlemen were Privy Councillors, to which he replied, “Then as you are Privy Councillors, I put off my hat; but as ye are rags of the beast, lo! –I put it on again.”

The refusal to doff one’s hat before secular or ecclesiastical authority was a sign of radicalism. The early Quaker George Fox wrote in the 1650s that “When the Lord sent me forth in the world, he forbade me to put off my hat to any, high or low.” (Fox, 1975) In 1638 a rector, Stanley Gower, and his patron, Sir Robert Harley, were accused of refusing to permit parishioners to remove their hats during the sermon and lessons. (CSPD), women on the other hand were expected to remain covered. St Paul’s instructions in Corthinians 1, 11 were that “Every man praying or prophesying, having his head covered, dishonoureth his head. But every woman that prayeth or prophesieth with her head uncovered dishonoureth her head”. Paul Cramer has stated, on the ECWS Living History page on Facebook that he had found a reference to elderly or infirm gentlemen being allowed to wear a night cap or coif during church services, presumably it was considered that being without something on your head would be detrimental to your health. Following on from that statement Pepys (22nd September 1664) declared that he had, “Got a strange cold in my head by flinging off my hat at dinner.” 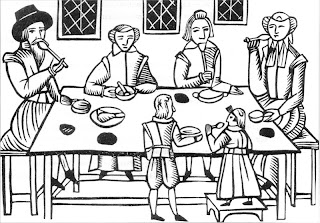 In secular terms one took one’s hat off before someone of a higher status. In the painting by Houckgeest of King Charles I dining at Whitehall, the only person in the painting wearing a hat is the king himself. In Charles II’s reign Pepys (27th April 1663) comments that “the Duke of Monmouth dancing with her (the Queen) with his hat in his hand, the King came in and kissed him, and made him put on his hat, which every body took notice of.” This form of deference also occurs between master and servant, so Randle Holmes in the Academy of Armoury (1688) states, “Nay it is a hard thing to distinguish a master from his man, but only that he (the servant) goes after, and stands with his head uncovered before him (the master).” The same form of deference occurs within the family, it is not only the son as a child who goes bareheaded in front of his father, but as John Aubrey comments, “Gentlemen of 30 or 40 years old, fitt for any employment in the commonwealth, were to stand like great mutes and fools bare headed before their parents” In the Print from the Rozburgh ballads (right) only the father wears a hat.
Corfield, Penelope. 1989. Dress for deference and dissent: hats and the decline of hat honour. Costume. 1989, Vol. 23. 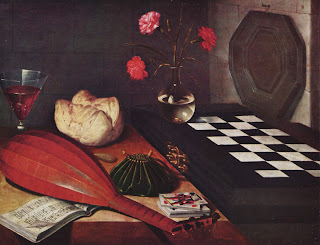 Round purses with drawstrings have been around for a very long time indeed, those produced in the 17th century with flat bottoms tend to be known as gaming purses. Although playing cards had been around for a couple of centuries these purses became fashionable at much the same time as the vogue for card games, and were used to carry money or gaming counters. The still life painting of the Five Senses by Baugin (1612-1663) shows a very plain version of this type of purse on a table

I have embedded links to museum examples of many of the surviving purses. These purses are heavily embroidered, and are often described as French on the basis that sometimes the decoration is of fleur de lys. The original ownership of some purses can be seen in the bases of the purses, which are often decorated with the coat of arms of their owner. The museum at Versailles for example has two purses, one with the coat of arms of the Marquis de Louvois (1641-1691) and the other with the arms of Phillippe, Duc de Orleans (1640-1701) brother of Louis XIV and brother in law to Charles II of England. These two links show the flat bottoms of the purses with their coats of arms. There is a very similar purse in the Museum of London which dates from the beginning of the 17th century.

The Victoria and Albert Museum owns several examples, including a much simpler one in green velvet, with a copper gilt cord decoration. The Metropolitan Museum in New York also has several examples, including one in needlepoint. In most cases the purse has a fabric outer, usually covered, in the surviving examples, with goldwork embroidery, they are often lined with silk, the stiff circle of the base being of leather. The purses that survive may well do so precisely because of the decoration. The way the drawstring braid is inserted can be seen clearly in one of the photos of this example from the V&A collection which has the arms of the Cardinal Duke de Matignon . The Met describe the finials on the drawstrings as wooden beads covered with metallic thread.
Posted by Pat Poppy at 22:44 No comments:

Hats to Handbags: Exhibition and study day at Dorchester Museum

Today I went to the exhibition that opened on Monday at Dorchester Museum. Hats to Handbags: women’s fashion accessories. The exhibition has cases of hats and bonnets, handbags and purses, umbrellas and parasols, fans, shoes and gloves from the museum’s collections. The earliest item on display is a 17th century white silk drawstring purse with silk embroidery. There is also a late 18th century miser purse, and a lovely pair of 1720s embroidered shoes. The majority of the items are 19th and 20th century, including a case on Princess Diana’s influence on hats in the 1980s. As you can see the museum's window has been done out like a hat shop. 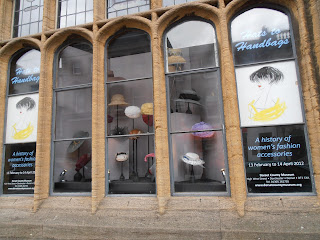 The exhibition is on until the 12th April, and there is a study day on the 31st March, which runs from 10am till 4pm and includes talks by:
Veronica Main (Curator of Costume and Textiles at Wardown Park Museum): ‘The Romance of the Straw Hat’
Helen Sergeant (Dorset County Museum): ‘Dorset Sun Bonnets’

Lisa Walker (milliner): ‘Who wants to be a Milliner?’

Phil Dampier (journalist and author): ‘What’s in the Queen’s Handbag?’

Tickets for the day are £15 per person and are available from the Museum Shop, or 01305 756827 or shop@dorsetcountymuseum.org
Posted by Pat Poppy at 20:51 No comments:

I am NOT a knitter, but I've had a go at re-creating two of the knitted items buried with the Gunnister man. The body, found in a bog in the Shetland Islands, dates from the end of the 17th century, beginning of the 18th century. A coin of 1694 in his purse gives us an earliest date. Although little of the body itself survived the woollen garments remained intact, including a shirt, breeches, jacket, and coat. The knitted garments were stockings, heavily repaired, gloves, two caps, a purse and a small scrap of knitting. I’ve tried making the cap with the brim and the purse. 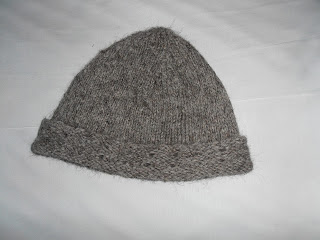 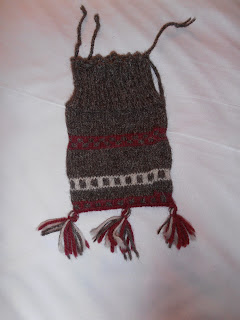 The purse. This is now brown but was probably grey; the pattern is worked in red and white. Like the cap it was worked on four needles. It starts at the top and works down. When casting on after every six stitches a loop is created from a chain of seven stitches. This creates a series of loops through which the drawstring runs. The drawstring is a double cord made from a plait created in the same yarn as the main colour of the purse. Three tassels are made from a mixture of the three yarns used in the knitting and are attached to the bottom of the purse. The original is 5¼ inches by 3¾ inches. The top two inches are knitted in a 2k, 2p rib. This finishes with a row of purl, after which the rest is worked in stocking stitch. After 12 rows of plain there are 6 rows of pattern in red, then 15 rows of plain followed by 5 rows of pattern, 5 rows of plain, then 5 rows of pattern to the bottom of the purse.
The original descriptions of the items are in Henshall, A. S. And Maxwell, S. Clothing and other articles from a late 17th century grave at Gunnister, Shetland. Proccedings of the Society of Antiquaries of Scotland, 1951-52. pp30-42
Posted by Pat Poppy at 20:35 No comments:

Whitework in the 18th century 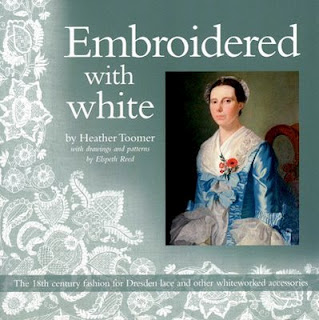 Spent yesterday afternoon at a WECS meeting where noted collector and author Heather Toomer spoke on the fashion for white work accessories in the 18th century, especially aprons, kerchiefs and sleeve ruffles. I must admit I knew little about so called Dresden work, also known as point de Saxe, before Heather’s beautifully illustrated lecture.  This is white embroidery on white semi transparent muslin, and sometimes in imitation of the laces of the time. Heather covered the changing styles in this kind of work from 1700 to 1800. She also looked at opaque whitework, on gentlemen's waistcoats and ladies stomachers. At the end I purchased a copy of her book Embroidered with white (ISBN 978 0 9542730 2 6) which contains many of the photographs from her talk, and some patterns for stomachers, pockets and kerchiefs which could be useable by anyone with the skill to do this incredibly detailed work. Heather brought along two tables worth of original items from her collection, and the stitchery on some is minute.
Posted by Pat Poppy at 17:18 No comments:

The Metropolian Museum in New York has two early mantuas, one from around 1700, and the other about 1708. As well as having photographs of these mantuas online they have also been creating pdfs of articles about ﻿ ﻿the mantuas.
So the 1700 example now gives access to the article by Adolph S Cavallo,. "The Kimberley Gown." Metropolitan Museum Journal, Vol. 3 (1970) at http://www.metmuseum.org/pubs/journals/1/pdf/1512604.pdf.bannered.pdf