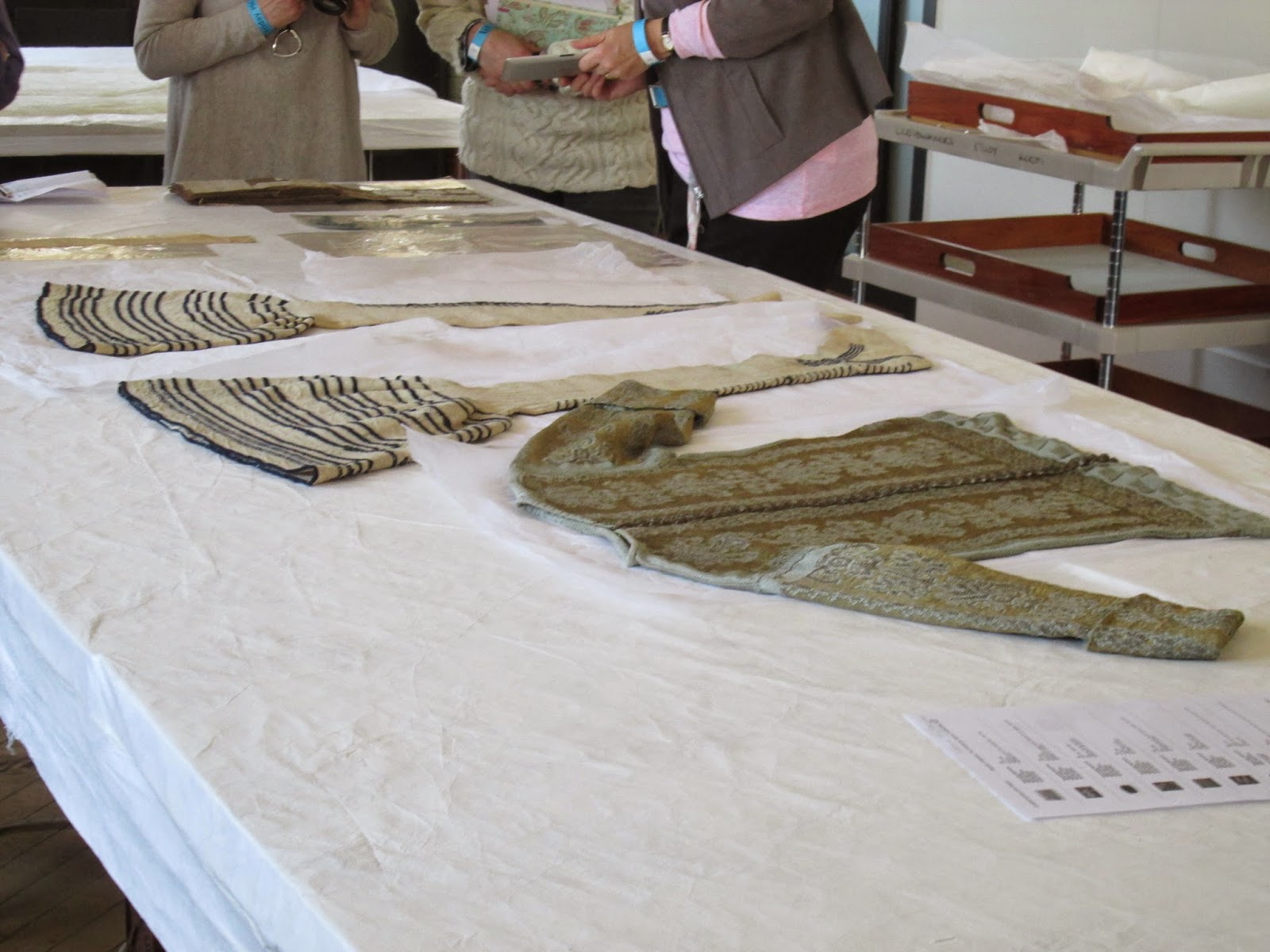 Kersey and the Colours of Kersey

Kersey is a twill woven wool fabric. Kerridge (1985) describes them in his book as “warp back cloths woven in twill order,” it is more complex than that, and I would go to Kerridge for a technical description if you are interested.


Kersey comes in several types, the 1552 Act divides them into ordinary, sorting, Devonshire (called dozens), and check kersies. Despite the name, Kersey is a town in Suffolk, kersies were made in various places. The Devonshire dozens were one type, and another statue refers to kersies made in York and Lancashire, but a large number were also made around Newbury in Berkshire by, among other people, John Winchcombe (c1487-1557) who was the Jack of Newbury of Thomas Deloney’s work. David Peacock’s PhD thesis on the Winchcombe family is available via Ethos.


One (standard) broadcloth was reckoned to be equal to three kerseys, this is less a matter of quality than of size. Throughout the fifteenth and sixteenth centuries both broadcloth and kersey were regulated by a series of Statutes. The Statute of 1465 set broadcloth as 2 yards wide and 24 yards long, while kersey was a yard and a nail (a nail is one sixteenth of a yard -2¼ inches) by 18 yards. However by the beginning of the seventeenth century some kerseys had shrunk to 1 yard by 16 yards, so three kerseys were 48 square yards of cloth, the same size as one broadcloth. That is for a standard broadcloth, long broadcloths were 28 to 31 yards in length.


How common is kersey


It is difficult to ascertain how common kersies were. They first appear in the mid 13th century, and by the 18th century Defoe wrote of Yorkshire kersey that one dealer traded for “£60,000 a year in kerseys only, to Holland and Hamburg.” In export terms in the first half of the sixteenth century, before the effects of the start of the Eighty Years’ War and the expansion of the new draperies, broadcloth and kersey appear to have formed 90% to 95% of cloth exports, with kersey being between 20% and 30% of this.


Having said that they are produced in such amounts, they don’t appear very often in probate inventories, but as Margaret Spufford said of probate inventories, they conceal “quicksands of very considerable magnitude.” It may be that people compiling the inventories could not tell the difference between broadcloth and kersey once the fabric had been cut up and made into garments, but beyond that garments are rarely mentioned in inventories. An analysis of some Oxfordshire inventories, which are fairly typical, shows that 85% either don’t mention clothes at all or just say wearing apparel without specifying. Of the 15% that do list clothes, only one third mention a fabric.


References to kersies in common literature often refer to kersey being used for hose, and hose is a very movable term in the sixteenth century. In the OED we have from 1543–4, “For iij quarters of yallow carssey for hose”, from 1596, “Blacke karsie stockings” and from 1607, “The Stockings that his clownish Legges did fit, Were Kersie to the calfe, and t'other knit.” It was William Harrison in his famous Description of England who declared of the Englishman that “ Neither was it merriere with England than when he was knowne abroad by his own clothes, and contented himself at home with his fine carsie hosen.”


The colours of kersey


This section is based mostly on an article by David Peacock which examined Gresham’s Day Book for 1546-1552, this listed goods ordered for export to Antwerp. Kersies produced by Thomas Dolman of Newbury shows that the bulk of the cloths ordered between 1547 and 1550 were blue (20.6%), watchet, a light blue (46.8%) and azure 17.6%, so that in total 85% were in shades of blue. The picture above is one I have had for at least six years, but unfortunately I have no idea where it came from, it shows the range of blues that can be gained by dying with woad. The other 15% of colours include 13% red and 2% green. Thomas Dolman’s 1575 will shows him owing “one other howse in Cheapstreate...beinge a Dyhowse and also six oadefattes (woad vats) two flotefattes, one furnace of copper and another of brass.” The only producer in the Day Book going beyond these colours is William Bennett, who between 1548 and 1550 produced 1,647 kersies for Gresham, however the breakdown is very similar, 35% watchet, 24% blue, 3.6% plunked (a sort of grey-blue), and 2.4% azure. Beyond the blues we have 7% red, 3% green, and a tiny amount (3 kersies) in violet.


If we compare this colour range with that obtained from analysis of English wills, we get a very different grouping. This may well be because these are cloths for export, because they are specifically kersey, and because this does not include the large numbers of cloths which weren’t dyed and are described as sheep colour or white. There is also the problem of black, natural or dyed, which appears to be one of the most popular colours listed in wills. Research on Essex wills reveals the main colours to be black, white, blue or red, with blue being mentioned mainly for men’s coats, breeches and stockings, while red appears to have been used mainly for women’s petticoats. Peachey makes the same association of red with women’s petticoats and blue with men’s coats.


Spufford, M., 1984. The great reclothing of rural England: petty chapmen and their wares in the seventeenth century. London: Hambledon Press.