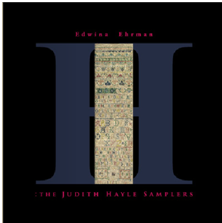 Back in 2001 I went to an exhibition of embroideries at Dorchester Museum, it was called The point of the Needle. They had a series of talks, and one of the speakers was Edwina Ehrman of the Museum of London. Her talk was fascinating; she had been researching Judith Hayle, and her daughter Rebecca Thomson, who taught needlework in Ipswich at the end of the seventeenth century, beginning of the eighteenth century. I didn’t realise until recently that in 2007 Edwina published a book, “The Judith Hayle Samplers.” (ISBN 978 0 9552086 0 7)


Why is Judith Hayle so interesting? First, she is the first teacher to be named on a sampler. Elizabeth Meadow’s 1691 sampler says, “Elizabeth Meadows is my name and with my needle I wrought the same and Juda Hayle was my dame.” Secondly a lot, fifteen or sixteen, samplers produced by pupils of her and her daughter survive. Finally Edwina has been able to find out a vast amount about both Judith and Rebecca and their pupils.


Judith Hayle was born in Ipswich in 1649, married in 1669, and was left a widow with six or seven children in 1685. Edwina does not know when she started teaching, but the first samplers with her name were produced in 1691. When she died in 1706 she left a will, and the inventory indicates that at that time she was running a shop and from the contents, “bone lace- head rowle & wyers & musling & forms, Lynnen horses & other odd nifles,” she was producing headdresses.  Her pupils were, for the most part, not the offspring of gentry, they were the children of mercers, drapers, weavers, malsters and yeomen, the emerging middle classes.


The book is 91 pages long, well illustrated with lots of colour photographs, and has a fascinating story to tell. Well worth it. The story continues for in 2010 an unknown Judith Hayle sampler, dated 1696, was sold at auction. Further information on the book is at http://www.needleprint.com/books.html