I was doing the ironing this morning, following  advice my mother gave me more than forty years ago that is, when ironing a garment with beads turn inside out and iron on a towel, and it reminded me of the wonderful ironing room in Petronella Dunois’s dolls house in the Rijksmuseum, which I must have seen twenty years ago. For those who don’t know the late seventeenth century dolls’ houses in the Rijksmuseum, these are not children’s toys but adults toys. There are three survivals, the earliest dates from c.1675 and the latest from about 1710, two are in the Rijksmuseum and one in Utrecht and they show life in miniature down to the smallest detail.

As far as ironing is concerned all the dolls’ houses have linen rooms complete with ironing tables, and small box irons of brass with wooden handles and their own stands, the whole thing being only 3.5 cm high.  These are not sad irons, that is solid irons, or slug irons where a heated solid slug of iron is inserted into the iron, but box irons that are hollow and designed to hold charcoal as the heating element.  Two of the houses also have linen presses. 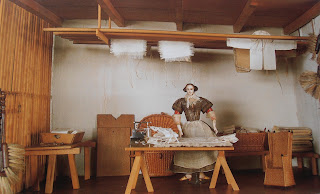 The house of Petronella Oortman c. 1710  can be seen on the web at http://www.rijksmuseum.nl/aria/aria_assets/BK-NM-1010


I’ve had problems trying to find a clear image of the house in the Utrecht Museum, but the linen room can be seen here


Washing clothes, doing the laundry and ironing is such a basic occupation, and yet we know very little about it in the 17th century. Queen Elizabeth had a laundress who was paid for washing and starching, mainly linens, but other clothes were brushed, beaten and aired, in fact she had a “Brusher of our robes.” There is mention of pressing of cloths, but not ironing, though linen smoothers go back to Viking days.  Lord Rochester, it’s not something I’d normally associated him with, is one of the first to mention things being ironed, as is Cecilia Fiennes.  So I think one can assume that ironing is something that is coming in during the seventeenth century.