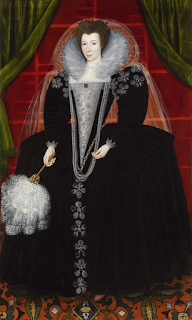 The stomacher is the infill at the front of the gown, or as Randle Holme said, “The Stomacher is that peece as lieth under the lacing or binding on of the Body of the Gown.” According to Minsheu it is so called “because it covers the stomacke.” It was in and out of favour from the middle of the 16th century until about the 1780s, depending on the fashion of the time. The stomacher could hide a myriad of faults as in the 1580 comment “If a Tailour make your gowne too little, you couer his fault with a broad stomacher.”


Early stomachers made for Queen Elizabeth I in 1576 were pasteboard covered in taffeta, but not all her stomachers were stiffened, she had others often of white satin decorated with silver and gold bobbin lace lined variously with fustian, sarsenet or camlet. These were possibly similar to the one in this c.1600 portrait of an unknown woman taken from Wikimedia Commons. By the time you move into the 18th century stomachers still run all the way from completely unstiffened, to solidly boned. A mid 18th  century stomacher listed in the Deliberately Concealed Garments Project is so degraded that all its layers can be seen: silk, backed with paper, a layer of whalebone strips held in place by a coarse linen, and then a block printed finer weave linen.

﻿﻿﻿﻿The stomachers that survive are in many ways mid range. The highly bejewelled ones tend not survive because they have been broken up for the value of the jewels. The “rich diamond stomacher for our intended queen” described by the British Magazine in 1761, is not the one that appears below in this detail from a portrait of Queen Charlotte it shows instead a stomacher that is more likely to be gold or silver lace rather than jewels. A stomacher of this type from the 1740s survives in the V&A collection,( note that the online image is upside down). There is a similar metallic lace decorated stomacher of the early 18th century in the Los Angeles Museum of Art.

More commonly the stomachers that survive are heavily embroidered. A late 16th century survival is an unmade half embroidered stomacher in the V&A collection.  Another example from a hundred years later 1700-1720 is very narrow.. In this unusual example the embroidery is worked in straw. Sometime the stomachers are not embroidered but made of patterned fabric as in this 1700-1730 example from Platt Hall

Many of the embroidered stomachers have a meandered ground behind the embroidery, as in this example from 1700-1730 in the Platt Hall collection, and this c.1710 example in the Metropolitan Museum, and this mid 18th century example in the Embroiderers Guild collection. These meandering background patterns are similar to the type frequently used in 18th-century flat quilting, and a stomacher in the V&A from1730-1750 is entirely quilted with some cording.

Some stomachers have fake lacing as in this 1720s example and this 1740s example. It has been conjectured that this may have been to provide somewhere to tuck your neckerchief.


A possible stomacher from the mid 17th seventeenth century of completely plain linen is in the Platt Hall collection, but there is very little information to confirm its use.


The stomacher could be held in place by the lacing, or by being pinned or even sew into place, and one of Queen Elizabeth’s mentions hooks and eyes. In the18th century some garments had fake stomacher fronts like the pet-en-l’air  of 1745-55 for which Arnold gives a pattern or the similar garment in the Platt Hall collection. 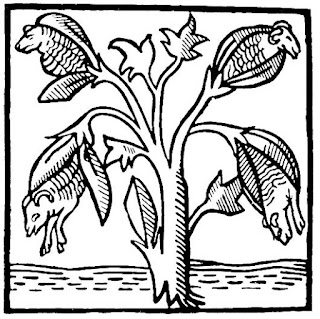 The introduction of cotton cloth to England was slow and gradual until the seventeenth century. If there is a reference to cottons (note the plural form) then the reference usually means the wool based cloth. If there is a reference to cotton wool or cotton yarn then the reference is to the fibres or thread made from vegetable cotton. Not that many people in England understood how cotton grew. The supposed travel writer Sir John Mandeville, who was probably  a Benedictine monk in France regurgitating other writers works wrote, "There grew [in India] a wonderful tree which bore tiny lambs on the endes of its branches. These branches were so pliable that they bent down to allow the lambs to feed when they are hungrie." This resulted in woodcuts such as the one on the right.


Cotton was used in England for the making of fustians. A petition of 1621 states,


“about twenty yeeres past diverse people in this Kingdome, but chiefly in the Countie of Lancaster, have found out the trade of making other fustians, made of a kind of bombast or downe, being a fruit of the earth growing upon little shrubs or bushes, brought into this kingdome by the Turkie merchants, from Smyrna, Cyprus, Acra and Sydon, but commonly called cotton wool. .. There is at least 40 thousand peeces of Fustian of this kind yeerely made in England.”


Fustian, usually though not always, referred to a fabric with a linen warp and a cotton weft and, although the term fustian is actually used much earlier in England than the petition would indicate, Janet Arnold has stated that much of this earlier fustian was imported and consequently expensive .  Sykas has indicated that some of these early fustians may not have been linen and cotton mix as there is a statue of 1495 regarding the import of deceitfully finished fustians. True fustians should have the nap raised and shorn with broadshears, in the deceitful fustians the nap was being singed with candles.


The variety referred to variously as fustian and apes, fustian a napes or fustian of Naples is described by Cotgrave as mock velvet, presumably because of this smooth raised nap . This was being made in Norwich as early as 1554 when the local weavers petitioned for their “fustian-a-napes” to be called Norwich fustian. By the end of the sixteenth century it appears to have become more common as a statue of 1597 states that “the wearing of fustian has grown to greater use than it ever was before.”


John Smythe considered that fustian would be good for soldiers’ doublets, saying that a “man may arme better upon [fustian] then upon canvas or anything that is more smooth”


2. To the honorable knights, citizens and burgesses of the Commons House of Parliament the humble petition...buying and selling of fustians made in England.... London : s.n., 1621.


5. Cotgrave, R. Dictionaries of the French and English Tongues. 1611.

Recently published.
Bass, Laura R. and Milena Hajana. Spanish Fashion in Early Modern Europe: The Prevelance and Prestige of Spanish Attire in the Courts of the 16th and 17th Centuries.

The modes of dress adopted at the Spanish court were highly influential elsewhere in Europe from about the mid 16th to the mid 17th century-the period corresponding to Spanish political hegemony. The nature and prevalence of the diffusion of Spanish fashion is, however, a phenomenon that has never been systematically studied, partly because it is no easy task to pool the numerous sources of information, both archival (in many languages) and visual.This book makes a most important contribution to this fundamental aspect of European history.

The contents include:
L.R. Bass "Dress and drama of urban life in the Spanish Hapsburg capital,"
M. Hajana "Spanish fashion in the kingdom of Bohemia under Rudolf II,"
M.J. Garcia Sierra "Who dresses kings and queens? Royal wardrobes and court tailors,"
A. Ribeiro "A story of pride and prejudice: perceptions of Spain and Spanish dress in 17th-century England,"
F. Barallo "Katherine Micaela at the court of Savoy,"
G. Guarino "Spanish fashions and sumptuary legislation in Hapsburg Italy,"
C. Thepaut-Cavasset "Marie-Louise d'Orléans, Queen of Spain,"
M. Hayward "Katherine of Aragon, Spanish Princess or Queen of England?,"
C. van Wyhe "The making and meaning of the Spanish habit at the Hapsburg courts".
Posted by Pat Poppy at 22:06 No comments: