I started this blog two years ago under the impression that it would probably turn out like diaries. I write in them for about two weeks and then give up, however it’s still going, possibly because it has to do with my abiding interest in costume and textiles. Anyway to NESAT, and to costume and textiles.


The volume of published proceedings of the last NESAT held in 2011 in Esslingen am Neckar in Germany, is now available from: http://www.vml.de/e/detail.php?ISBN=978-3-86757-002-2&hl=nesat. This is a wide ranging volume as the subjects covered go from the Neolithic to the 18th century. For those interested in the early modern period it contains both Beatrix Nutz preliminary report on the 15th century bras from Lengberg Castle, and Carol Christiansen’s group on The Gunnister Man Project: Researching and Reconstructing a Late 17th Century Garment Ensemble. Price €54.80


The next NESAT will be held in 2014 in Hallstatt, Austria The programme can be found at http://www.nesat.org/hallstatt_xii/program_de.html. It includes Jane Malcolm-Davies on excavated sixteenth-century knitted caps, and E. Wincott Heckett on 16th and 17th century metal laces.
Posted by Pat Poppy at 18:07 1 comment:

Wenceslaus Hollar (1607-1677) published a large number of costume prints in the middle of the seventeenth century; this looks at those that depict Englishwomen in winter clothing. The images examined are Pennington numbers 609, 613, 617, 1789, 1888, and 1999. Pennington wrote a full catalogue of Hollar’s engravings and assigned each print a number, the print histories of Hollar’s works are very complicated and some prints have several states, where for example the engravings have been reworked, I am not going to comment on the states of the prints. The link should take you to better images.


Four of the prints are full length and two are half-length, all are known to have been drawn and printed between 1639 and 1649. I have sourced them in several ways, from my own collection, from Wikimedia Commons and from the Hollar Digital Archive, which I recommend as it has all of the Ornatus, Theatrum and Aula prints, but not Hollar’s Season.


Two items of clothing accessory appear in all of the prints, a hood, and a fur muff, a third a half face mask appears in all except the rear view, where obviously you can’t see her face. Three of the ladies have a fur around their neck, and a fourth has a fur on the table next to her.

﻿
1.         Pennington 609. This is the full length Winter from Hollar’s Seasons, with the date 1643. She is  standing at the junction of Cheapside and Poultry in the City of London. . The lines underneath her read,


“The cold, not cruelty makes her weare


For a smoother skin at night,


Embraceth her with more delight.”


She is wearing a fur collar and muff, a chaperone hood with a second hood/coif underneath, and a half mask. It looks as though she is holding up two skirts, the shirt of her gown and a petticoat, and there is another petticoat with a lace trimming around the hem. Her shoes have high heels and she wears a shoe rose with them. I refer to the fur collar as a collar, but there were several different names in use, though it is sometimes difficult to ascertain what precisely is meant by a palatine, a tippet or a zibellini


and think you then the cold can doe us harme


but though it bee to hard for this attire


She is wearing a hood and carrying a muff, her half mask and fur collar are on the shelf next to her. She is also wearing gloves, as can been seen by the wrinkles going up her wrist and the lines from her fingers. Gloves were ubiquitous and bought in large quantities, the accounts of the Marquis of Hertford for the year 1641-2 show gloves being bought for his teenage children six pairs at a time, more than 100 pairs of gloves were bought for the six children in the course of one year, at one point “five dozen and ten paire of gloves for the young ladies” were purchased at a cost of £2 9s 8d. These accounts also show hoods being bought for “the young ladies”, that is the three daughters of the Marquis, “paid for two black taffetie hoods for my ladie Francis 7 shillings”


﻿﻿
3.         Pennington 617 is another three quarter length issued by Stent in 1644. This lady wears the same four items as the previous two, a muff, hood, fur collar and half mask. A full face mask was discovered in 2010 and a full record for it can be found on the database of the Portable Antiquities Scheme. Half masks were tied on as can be seen in the Hollar engraving where the lady is not wearing a hood.

4.         Pennington 1789, this full length is from Ornatus, and was drawn in 1639. She has the hood, muff and half mask, but she also has what looks to be a waist length cloak or shawl. Interestingly Cunnington describes this as an ample overcoat, but a closer inspection of the print shows that what they took to be a sleeve is a folded piece of cloth. A similar, but single layer, rectangle of cloth can be seen in another front view from Theatrum  see figure 4a

5.         Pennington 1884 is a rear view with the label Nobilis Mulier Anglica in Vestitu Hiemali (Noble English woman in winter dress), engraved in 1643. This gives a rare rear view of the hood, and she carries a muff, but does not have a fur collar.

6.         Pennington 1999, another full length drawn in 1644 and labelled “The winter habit of ane English gentlewoman”. In both this and Pennington 617 and 1789 there appears to be a line drawn under the mouth, which might indicate that the ladies are wearing chin clouts or mufflers, piece of cloth worn over the chin and the neck, again these appear in the Hereford accounts. “Paid to Fraunces to buy chin cloathes for the young ladies 5s 2d.”


Hollar, Wenceslaus. 1979. The four seasons, with an introduction by J. L. Nevinson and topographical notes by Ann Saunders. London : The Costume Society, 1979.

Elizabeth I & Her People – Exhibition and book review 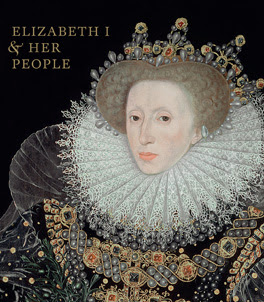 When we went to see the Cheapside Hoard exhibition we spend the afternoon at the National Portrait Gallery for its Elizabeth I & Her People exhibition. The exhibition is excellent, and contains lots of costume and other materials as well as the portraits.


I think we went the wrong way round the exhibition and were meant to start with Elizabeth and work our way round to the poor, but I looked to my right and that was it. There was the possibly / probably sailor’s shirt and breeches from the Museum of London. They are displayed in a glass case were you can view from three sides, and get close enough to see the diaper pattern of the  shirt material and the twill weave of the breeches, the website link has several close up photos. There has been much discussion, among re-enactors at least, about whether the outfit is as old as they say, some of which is focused on the shoulder reinforcement. I must admit this type of reinforcement is just what I have done on my son’s shirt where constant wear has thinned the material to tearing point. The outfit is displayed with the print of Vecellio’s sailor of 1598. Also in the working class section of the exhibition is the lovely child’s knitted mitten again borrowed from the Museum of London


Next we have the professional classes, with portraits of lawyers, clergymen and physicians, including a rather gruesome John Banister delivering and anatomy lecture. There is one woman, the calligrapher Esther Inglis., and following on from these, the rising merchant classes. In this section as well as the portraits you will find, some of a collection of 16th century knitted caps, from the Museum of London., a beautiful blackwork woman’s waistcoat from the Fashion Museum Bath, and other clothing related items like pins and thimbles. One thing you can stand and try to read is a long inventory of goods from a London haberdasher in 1582. There are also gloves and drawing instruments and coins.


Still moving round in the wrong direction we have the gentry, nobility and court. Here the portraits include the English sea dogs, Raleigh, Frobisher and Drake, the nobility in the guise of  the Duke and Duchess of Norfolk by Hans Eworth, Elizabeth’s favourite the Earl of Leicester and her Lord Treasurer, William Cecil, among others. This grouping is accompanied by more upmarket goods, pomanders, sweet bags, rings, rapiers, and a very nice wheel-lock pistol.


Then we have Elizabeth herself in several portraits including the ermine portrait, and two versions of her with three goddesses. We were back at the beginning, having gone the wrong way around the entire thing. Here we found maps of Britain and London and Hoefnagel’s Fete at Bermondsey.


The book is well worth £25 (it’s a hardback), and as well as providing a catalogue of the exhibition there are four essays at the beginning of the work including, for those interested in clothes, Susan North on What Elizabethan’s wore: evidence from wills and inventories of the “middling sort”

This exhibition is on until 27th April 2014, so if you can get to it, go. If you can’t get to it, buy the book. Having said that getting into the exhibition is interesting, no cameras, no bags, no coats (lockers are available), past security guards and through a full height turnstile, it’s like getting into a bank vault, but then this is serious jewellery.


In 1912 some workmen discovered a large cache of late sixteenth, early seventeenth century jewellery in a cellar in Cheapside. Cheapside is a major road in the City of London running, roughly, from St Paul’s Cathedral east towards the Bank of England, and in the early seventeenth century contained many goldsmiths’ shops. The hoard was purchased and divided between the London Museum, the Guildhall and the British Museum. This is the first time all 400 odd pieces have been brought together. The first part of the exhibition covers all of this information with photographs, contemporary illustrations, maps, and some wonderful early shop signs. It then goes on to set the scene of London in the first half of the 17th century, the work of goldsmiths and jewellers, and their shops.

The discussion of where the jewels themselves come from is fascinating because it gives an idea of how wide the trade routes were. There are sapphires from Burma, India and Sri Lanka, while some amethysts came from India others were sourced from Ethiopia, Bohemia, Albania and Brazil. Rubies and garnets were from Burma, India and Sri Lanka, turquoise from Persia. Emeralds were from Colombia, and include a spectacular watch in an emerald case.


The exhibition, and the book, is particularly good at matching jewellery in paintings with examples in the collection. There are chains meant worn in loops like those that appear on the portrait of a woman previously thought to be Mary, Queen of Scots. There are beautiful pendant earrings like those worn by the Countess of Southampton, and there are plenty of rings as worn by Margaret Cotton both on her hand and in her ruff. Interesting there are not many pearls, though this maybe because they have not survived the conditions in which they were hidden, however there is a lovely tiny pin, topped with a ship the hull made from a baroque pearl and the rigging of gold.


There is a discussion in both the exhibition and the book as to when the hoard may have been hidden. There is a datable watch made by Gaultier Ferlite, probably between 1610 and 1620, it is the only watch made by him to have survived. There is also a seal with the arms of a Viscount Stafford, the only person to fit this became a viscount in 1637. 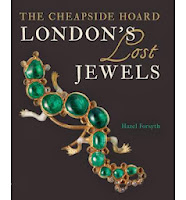 A BBC4 programme on the Cheapside Hoard, made to coincide with the exhibition, is not currently available via the BBC website, but it is available online in two parts from YouTube: