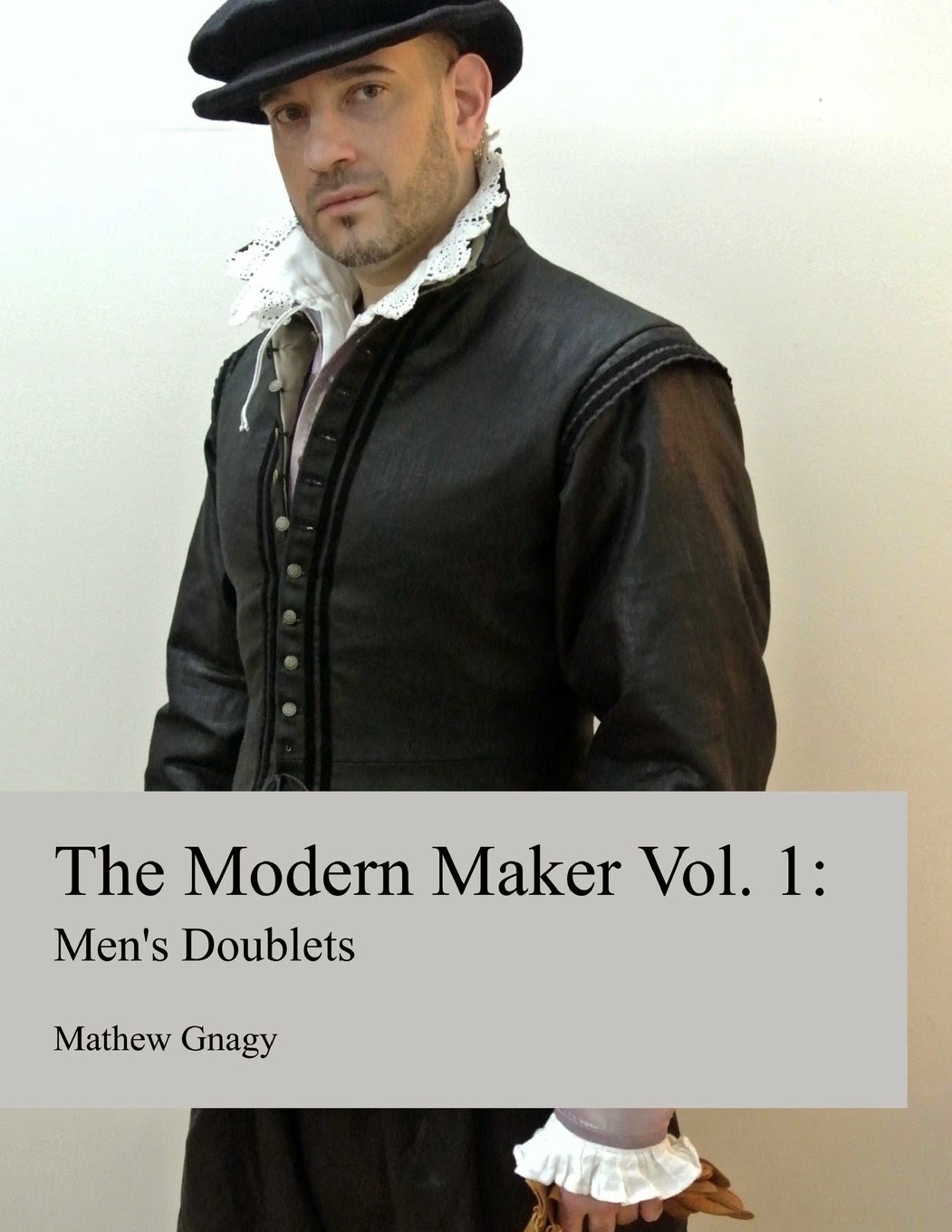 This book was my Christmas present to myself. It is useful for two reasons, first it is on men’s wear and there is very little on the subject, and secondly it is a practical book on how to make early 17th century men’s doublets. It says volume one, so we can expect volumes on breeches and other items to follow.

Mathew trained as a professional tailor, and it shows. The volume, 149 well illustrated pages, uses as its example a  pattern published in 1618 in Geometria, y traça perteneciente al oficio de sastres, by  Francisco de la Rocha de Burguen, this is not the doublet illustrated on the cover. The book is divided into eight sections, taking you through the principles of tailoring, choosing the fabrics, making the pattern, cutting the pieces, the hand sewing techniques to use, and then making up the garment. The final two sections cover information on surviving garments and construction details. Each section is well illustrated with coloured photographs showing step by step, for example, how to pad stitch, how to make a buttonhole, and how to wrap a silk button.

Montaigne - Of the use of apparell


I have been reading the essay by Michel de Montaigne (1533-1592) on the subject of clothes, and since he says he wrote it in the chill-cold season, I thought it appropriate for a December post. The version below is the translation by John Florio (1553-1625) that was published in 1603. I have left the spelling as it was published. It is interesting to compare translations, as they use the terminology of their day, so later translations refer to this essay not as Of the use of apparel, but On the custom of clothing.

While Montaigne’s thoughts roam across both continents and history he does make a few interesting comments on the clothing of his own country and estate, speaking for example of “country swains” going bare breasted to the navel. He compares himself to local husbandmen (small farmers), saying that while he would not go unbuttoned or untrussed, they would consider themselves fettered by buttoning and trussing. Which brings to mind re-enactors arguments as to whether working class men trussed there points, that is attached their breeches to their doublets.

From Montaigne’s Essays - Chapter 35: Of the use of apparell.

Whatsoever I aime at, I must needs force some of customes contradictions, so carefully hath she barred all our entrances. I was devising in this chil-cold season whether the fashion of these late discovered nations to go naked, be a custome forced by the hot temperature of the ayre, as we say of the Indians and Moores, or whether it be an original manner of mankind. Men of understanding, forasmuch as whatsoever is contained under heaven (as saith the Holy Writ) is subject to the same lawes, are wont in such like considerations, where naturall lawes are to be distinguished from those invented by man, to have recourse to the generall policie of the world, where nothing that is counterfet can be admitted. Now, all things being exactly furnished else-whence with all necessaries to maintaine this being, it is not to be imagined that we alone should be produced in a defective and indigent estate, yea, and in such a one as cannot be maintained without forrain helpe. My opinion is, that even as all plants, trees, living creatures, and whatsoever hath life, is naturally seene furnished with sufficient furmture to defend it selfe from the injurie of all wethers:
Proptereaque fere res omnes, aut corio sunt,
Aut seta, aut conchis, aut cano, aut cortice tectæ. -- LUCR. iv. 932.
Therefore all things almost we cover'd marke,
With hide, or haire, or shels, or brawne, or barke.

Even so were we. But as those who by an artificiall light extinguish the brightnesse of the day, we have quenched our proper means by such as we have borrowed. And wee may easily discerne that only custome makes that seeme impossible unto us which is not so: For of those nations that have no knowledge of cloaths, some are found situated under the same heaven, and climate or parallel, that we are in, and more cold and sharper than ours. Moreover, the tenderest parts of us are ever bare and naked, as our eyes, face, mouth nose, and eares; and our country swaines (as our fore, fathers wont) most of them at this day goe bare-breasted downe to the navill. Had we beene borne needing petticoats and breeches, there is no doubt but Nature would have armed that which she hath left to the batteries of seasons and furie of wethers with some thicker skin or hide, as shee hath done our fingers ends and the soales of our feet. Why seemes this hard to be believed? Betweene my fashion of apparell and that of one of my countrie-clownes, I find much more difference betweene him and me than betweene his fashion and that of a man who is cloathed but with his bare skin. How many men (especially in Turkie) go ever naked for devotions sake? A certaine man demanded of one of our loytring rogues whom in the deep of frosty Winter he saw wandering up and downe with nothing but his shirt about him, and yet as blithe and lusty as anot her that keepes himselfe muffled and wrapt in wanne furres up to the eares; how he could have patience to go so. 'And have not you, good Sir' (answered he) 'your face all bare? Imagine I am all face.' The Italians report (as far as I remember) of the Duke of Florence his fool, who when his Lord asked him how, being so ill-clad, he could endure the cold, which he hardly was able to doe himselfe; to whom the foole replied: 'Master, use but my receipt and put all the cloaths you have upon you, as I doe all mine; you shall feele no more cold than I doe.' King Massinissa, even in his eldest daies, were it never so cold, so frosty, so stormie, or sharpe wether, could never be induced to put something on his head, but went alwaies bareheaded. The like is reported of the Emperor Severus. In the battles that past betweene the Ægyptians and the Persians, Herodotus saith, that both himselfe and divers others tooke speciall notice that of such as lay slaine on the ground the Ægyptians sculs were without comparison much harder than the Persians: by reason that these go ever with their heads covered with coifs and turbants, and those from their infancie ever shaven and bare-headed. And King Agesilaus, even in his decrepit age, was ever wont to weare his cloaths both Winter and Summer alike. Suetonius affirmeth that Cæsar did ever march foremost before his troupes, and most commonly bare-headed, and on foot, whether the sunne shone or it rained. The like is reported of Hanniball,
------ tum vertice nudo,
Excipere insanos imbres, cælique ruinam. -- Syl. Ital. 250.
Bare-headed then he did endure,
Heav'ns ruine and mad-raging showre.

A Venetian that hath long dwelt amongst them, and who is but lately returned thence, writeth, that in the Kingdome of Pegu, both men and women, leaving all other parts clad, goe ever bare-footed, yea, and on horsebacke also. And Plato for the better health and preservation of the body doth earnestly perswade that no man should ever give the feet and the head other cover than Nature hath allotted them. He whom the Polonians chuse for their King, next to ours who may worthily be esteemed one of the greatest Princes of our age, doth never weare gloves, nor what wether soover it be, winter or summer, other bonnet abroad than in the warme house. As I cannot endure to goe unbuttoned or untrussed, so the husband-men neighbouring about me would be and feele themselves as fettered or hand-bound with going so. Varro is of opinion, that when we were appointed to stand bare headed before the gods or in presence of the Magistrates, it was rather done for our health, and to enure and arme us against injuries of the wether, than in respect of reverence. And since we are speaking of cold, and are French-men, accustomed so strangely to array our selves in party-coloured sutes (not I, because I seldome weare any other than blacke or white, in imitation of my father), let us adde this one thing more, which Captaine Martyn du Bellay relateth in the voyage of Luxemburg, where he saith to have seene so hard frosts, that their munition-wines were faine to be cut and broken with hatchets and wedges, and shared unto the souldiers by weight, which they carried away in baskets; and Ovid,
Nudaque consistunt formam servantia testæ
Vina, nec hausta meri sed data frusta bibunt. -- Ovid. Trist. iii. El. x. 23.
Bare wines, still keeping forme of caske stand fast.
Not gulps, but gobbets of their wine they taste.

The frosts are so hard and sharpe in the emboguing of the Meotis fennes, that in the very place where Mithridates Lieutenant had delivered a battel to his enemies, on hard ground and drie-footed, and there defeated them, the next summer he there obtained another sea- battel against them. The Romanes suffered a great disadvantage in the fight they had with the Carthaginians neere unto Placentia, for so much as they went to their charge with their blood congealed and limbes benummed, through extreme cold: whereas Hanniball had caused many fires to be made throughout his campe, to warme his souldiers by, and a quantitie of oile to be distributed amongst them, that therewith annointing themselves, they might make their sinewes more supple and nimble, and harden their pores against the bitter blasts of cold wind which then blew, and nipping piercing of the ayre. The Grecians retreat from Babilon into their countrie is renowned by reason of the many difficulties and encombrances they encountred withall, and were to surmount: whereof this was one, that in the mountaines of Armenia, being surprised and encircled with so horrible and great quantitie of snow, that they lost both the knowledge of the countrie and the wayes: wherewith they were so straitly beset that they continued a day and a night without eating or drinking; and most of their horses and cattell died; of their men a great number also deceased; many with the glittering and whitenesse of the snow were stricken blinde; divers through the extremitie were lamed, and their limbes shrunken up; many starke stiffe and frozen with colde, although their senses were yet whole. Alexander saw a nation where in winter they burie their fruit-bearing trees under the ground, to defend them from the frost: a thing also used amongst some of our neighbours. Touching the subject of apparell, the King of Mexico, was wont to change and shift his clothes foure times a day, and never wore them againe, employing his leavings and cast-sutes for his continuall liberalities and rewards; as also neither pot nor dish, nor any implement of his kitchen or table were twice brought before him.
Posted by Pat Poppy at 20:47 No comments: