Fans of the 16th and 17th centuries

Although fans were known from antiquity, and were used in the middle ages in religious ceremonies to keep flies away from the communion, it is only in the sixteenth century that they start to be a fashionable accessory. Fans come in two types, fixed and folding. The folding fan does not appear in Europe until relatively late apparently appearing sometime in the mid 16th century. According to Anne Houget they were brought from Japan to Europe by the Portuguese around 1540.  During the 16th and 17th centuries fans of both types can be seen in portraits. Hollar’s twenty six plates of Englishwomen, the Ornatus Muliebris of 1640, has four of the figures carrying fans, two fixed and two folding, plus one lady who appears to be carrying a fixed fan with a looking glass in the handle.  The folding fan gradually took over from the fixed fan until, at the end of the 17th century, the fixed fan had almost completely disappeared. Links to online examples appear throughout this article.

The earlier fixed fans either consisted of a solid fan on a handle, or of a handle into which feathers, or something similar, could be inserted. For example the feather fan in this 1621 portrait of Lady Lister by Marcus Geeraerts  (love the see through apron too), shows clearly the fan handle with the feathers inserted, hanging from her girdle. Very few of these handles still exist, the Victoria and Albert Museum has a Venetian fan handle of about 1550 of brass gilt in an openwork design. There are several portraits of Queen Elizabeth carrying this type of fan, the handle richly jewelled, and there are many in the Stowe inventory of her clothing. One of the most elaborate in her collection was “firste one fanne of white feathers with a handle of golde garnished with fower faire diamonds twoe faire rubies, twoe small diamonds and seaven rocke rubies and one emerode”; it was kept in a case of black velvet. White were not the only feathers used, Elizabeth also had fans of black feathers, carnation, white and orange feathers, one described as having painted feathers, and one of the “feathers of the Birde of Paradise and other colored feathers”.

These feather fans were status symbols, and John Aubrey at the end of the century wrote of them. “The Gentlewoman then had prodigious Fannes, as is to be seen in the old pictures, like that instrument which is used to drive feathers: it had a handle of at least half a yard long; with these the daughters were corrected oftentimes. Sir Edward Coke, Lord Chief Justice, rode the circuit with just such a fan; Mr Dugdale sawe it, who told me of it. The Earl of Manchester used also a fan. But fathers and mothers slash'd their daughters in the time of that besome discipline when they were perfect women.” Interestingly by the middle of the 17th century Helene Alexander considers that the fixed fan was becoming associated more with the bourgeoisie, while the folding fan was associated with upper classes.

The earliest fan in the V&A collection is a brise fan dating from the 1620s. I am amazed it has survived as it is described as “cut straw applied to silk covered cardboard, reinforced with metal rods, decorated with gold paper and silk.”


Sometimes the leaf can be cut (decoupe) in various ways. Diane Cecil, painted in 1614 by William Larkin, is carrying a folding fan which may well be decoupe fan, the portrait is in the Suffolk Collection at Kenwood House. There is a superb example of a decoupe fan dating from 1590-1600 in the Museum of Fine Arts Boston, it looks like lace, but is actually cut skin.

The mica fan of about 1665 in the Fitzwilliam Museum is one of only four of this type to survive. [6th July 20 there are problems with the Fitzwilliam website so I have put a detail from this fan below ] Three bands of mica panels have been painted with figures and mounted on a paper fan leaf. The leaf has then been mounted on ivory sticks. Another of these fans, this one possibly Dutch, is in the Museum of Fine Arts Boston, but most of its mica inserts are missing. 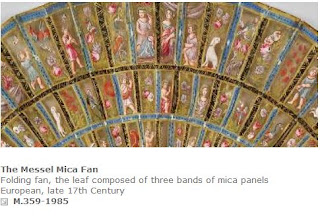 Leaves of fans sometimes survive unmounted, for example there is a leaf in the Museum of London that dates from 1686 and depicts the Lord Mayor of London’s procession.

By the late 17th century folding fans appear to have taken over almost completely. In France in1678 a guild, the Association de Eventaillistes, had been formed producing fans similar to this French example of c.1670-1680 in the V&A collection . The reverse of the fan often had a different picture to that the front, as in the fan of c.1700 in the Fitzwilliam Museum, [6th July 20 there are problems with the Fitzwilliam website] which depicts the Rape of the Sabine women, from a painting by Pietro da Cortona of between 1626 and 1631 on one side, and a mixture of flowers and birds and putti on the other. 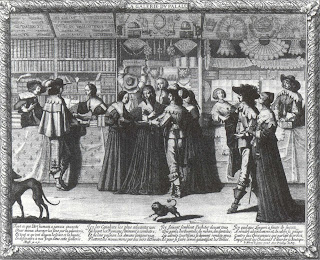 Fans are shown being sold in the wonderful 1636 etching by Abraham Bosse of shops in the La Galerie du Palais in Paris. The rear centre shows folding fans displayed opened out, while in the centre front a gentleman displays a fan to a lady.