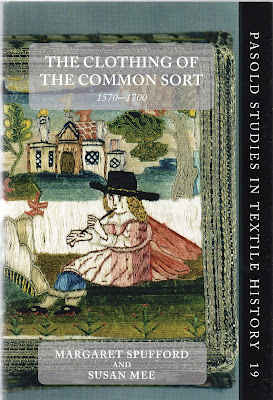 I have been aware of this book being in the pipeline for more than ten years; mainly because Spufford did publish two papers based on the research. (1) (2)
1. Probate Accounts and Clothing
The book begins with a discussion of probate accounts and clothing. Probate accounts, are NOT probate inventories. The inventories list the goods that the deceased had at their death, ending with a charge value, that it the total value of the moveable goods the deceased owned. The accounts, which are much rarer than the inventories, start with the charge value, and then account for the costs that have to come out of the estate. Peter Spufford created a database of over 30,000 accounts, and although this is skewed against the very poorest, who were exempt from the probate procedure, it is also skewed against the very richest, as it does not include accounts from the Prerogative Court at Canterbury. These accounts were then whittled down to just over 8,000, by removing those for whom status and/or occupation were unknown. Spufford and Mee then extracted accounts which included the clothing of minor children; these can have been any age up to 21 years. The first section of the book goes on to discuss the language of “sorts”, what is the “common sort” or the “middling sort”, and concludes with a case study of John Fleetwood’s 1674 accounts.

3: Clothing the poorest. Evidence from poor relief records
Before going into the probate account information, Spufford and Mee use poor law records, to examine clothing given to the very poorest in society. They look at both clothing given by charities and that given by overseers of the poor. In comparing the prices of fabrics used for the poor with those in the accounts they come to the conclusion that, certainly for some garments, cheap fabric seems to have been considered a false economy.

Spufford and Mee go into considerable detail as to how fluid these divisions can be. As an example, the general perception is that if someone says they are a labourer they are poor; in the database the lowest value for a labourer is £4, the highest is £666, the median is £29 and the average is £41. The same sort of spread occurs in other occupations as well, which is why they are divided by worth and not status. In most of these chapters Spufford and Mee talk about clothing by gender, and also footwear, headwear, undergarments, outerwear and gloves, and fabrics and colours.
An interesting point about all three of these chapters is that, although they make a point of putting the date of any example they use, they don’t often indicate how things changed over time, and they are looking at a 130 year period that saw great changes in clothing. In her article in Textile History (2) Spufford broke down the use of fabrics into: up to 1610, 1610 to 1660 and after 1660. There are areas where the book could do with that sort of division. In table 3 (pages 27-29) the numbers of specific garments in the database are given with the earliest and latest occurrence, not unsurprisingly shoes appear from 1570 to 1703, however as the authors state, “The fluidity of terminology that applies to clothing and changes in fashion presented some problems.” As they have based the table subdivision on King’s 1688 table, this means they have pushed certain garments together, gowns and mantuas for example. Some of the changes are laid out, in chapter 3 there is a section on the provision of mantuas to poor women in the last two decades of the seventeenth century. In chapter 4 the section on fabrics and colours mentions that while russet is the most common cloth in labourers’ accounts, this is all pre 1620, and there is a “total lack of references” after that date. But it is difficult to pull out the change in clothing over time.

In chapter 4 they talk about clothing at the margins of poverty, and about the mending and cleaning of clothes. They also talk about second hand clothing, or the lack of information on it, and also in passing on the theft of clothing, an area which requires a good deal more research since in some areas theft of clothing constituted over 25% of all larceny cases. (3)

In chapter 5 looking at the yeoman equivalent class we have a discussion of the Abingdon and Reigate doublets. Here there is a first discussion of lace upon clothing, and of clothing given as legacies and bequests. There are sections on the cleaning and on the storage of clothing. The chapter ends with three case studies, a 1585 yeoman and his wife, the clothing account of Thomas Tarleton from 1612 to 1619, and of Anne Bartholomew from 1629 to1634.

Chapter 6 is looking at the “chief inhabitants” There is a whole section on the Crayfordes in the 1570s, this is unsurprising as Mee has written on them before. (4) There is also a section on childbed linen, and on bodies/stays, with a photo of the Sittingborne stays.

7: Customers and Tradesmen
This section looks in part at the development of retailing, and how historians have pushed back the date at which this is supposed to have started. It shows that there was a network of tradesmen providing clothing related items, but also they suggest there was a change in shopping experience in the last two decades of the seventeenth century. It then looks at tailors and seamstresses and the making up of clothes, and how people shopped for clothes.

8: Conclusion: The Clothing of the Common Sort
This draws together the threads of their argument and, as they say at the end, shows that “people of various ranks of society...were prepared to acquire clothing ‘in as large amounts as they could afford’”

Glossaries: Garments and accessories, and fabrics.
The book concludes with two glossaries. Some of the definitions are debateable, and I could wish that the list of sources from which they were compiled had included the Oxford English Dictionary, and perhaps Beck’s Draper’s Dictionary.