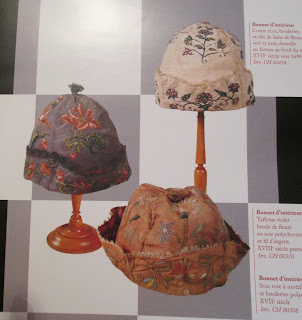 For those travelling to the east of France this year, I recommend a visit to the Musée du Costume at Chateau Chinon, in the Nièvre departement of France. It is usually closed from Christmas to sometime in February, and it does have its own website where you can get further information.

The museum was based originally on the collections of Jules Dardy, though it has grown since then, and has been open to the public in the mansion house of the Buteau-Ravizy family, since 1992.

The collection consists of over 5,000 items ranging in date from the late 17th century to the 1970s. The two photographs shown here are from the guide Voyage au Coeur des Collections, by Francoise Tetart-Vittu and others, published in 2011 (ISBN 978 2 914003 05 6; €15). The guide is recommended and well worth the money. It is well written and extremely well illustrated in colour,  but is not unfortunately available in English. 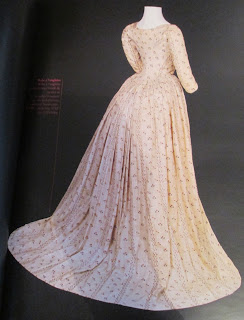 The top photograph shows three men’s nightcaps or “bonnets d’interieur”, the top example is c.1690, the middle example is from the the first quarter of the 18th century, and the bootom example has just been dated generally to the 18th century.

The lower photograph is of a robe a l’anglaise of about 1785, in linen embroidered with silk.

An article on the museum, again in French, is available here.
Posted by Pat Poppy at 15:34