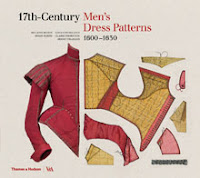 This is the third book in the Victoria and Albert Museum’s series of patterns from seventeenth century clothing in their collection, and the first to deal with men’s wear. (1) The book has 12 chapters covers 13 items in the V&A collection, 7 can be considered as accessories and 6 as main garments.
The book begins with a short summary of what a man’s wardrobe would consist of at this time, based on surviving wills and inventories from all levels of society. There is also an explanation of clothing terms used at the time, much of it based on Randal Holmes Academy of Armoury.

There are almost 150 pages of patterns and construction details. Two thirds of these relate to the six main garments, which are three doublets (c1600-10, c.1620 and c1625-30), a suit comprising doublet and breeches (c1618) and a cloak (c1560-1600). Most of these have not had patterns published before, however the suit is that of Sir Richard Cotton, and patterns for that have appeared in Arnold (2) and Waugh (3), but not in such detail.  For each garment there are portraits of men wearing similar garments, masses of photographic details of both the exterior and interior of the garment and x-rays. These are followed by pages of patterns and finally by details of the construction.

The seven accessories comprise a sword girdle and hangers, a felt hat, a picadil, an embroidered nightcap, a linen nightcap liner, a pair of mittens and a linen stocking. Again these have not appeared before and, although this is a book of men’s patterns, the hat, mittens and stockings could be worn by either sex.

The detailed examinations that the authors have done are incredible, and show us both what can and cannot be ascertained though detailed examination, for example even though fibres from the hat were examined microscopically it was not possible to determine the type of felt used. Where possible details are given which will allow for reconstruction. The buttons on the first doublet are described as “woven in a chevron pattern using green silk floss and silver-gilt filé threads”.  The pattern for the bobbin lace on the nightcap is detailed enough for anyone who knows how to make bobbin lace to produce a copy. There are step by step instructions on how to produce the finger looped lace on the linen stocking.

At £35 (you can get it for less) well worth purchasing.