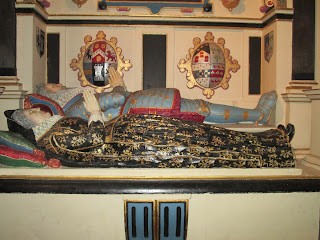 This magnificent tomb is of Sir Richard Mompesson (d1627) and his third wife Katherine (d.1622). The colours are tremendous, but not original as the tomb was overpainted in the 1960s.(1) A coat of arms in its original colours, now somewhat faded, has been found on the underside of the tomb, showing how it was originally coloured. (2) 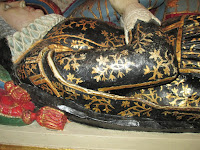 Sir Richard Mompesson was a younger son of minor gentry, however his first wife Margaret, was the daughter of the first Lord Howard of Effingham, and  therefore sister to the second, both were Lord High Admiral of England.(3) The lady buried with him is however his third wife. He isn’t of interest to clothing people, because he is shown wearing a set of armour. I’m sure people who are interested in armour would have more to say. 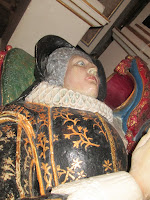 Katherine Mompesson is depicted wearing a gown with long hanging sleeves reaching to the calves of her legs. This style of gown is very similar to the type in some of the paintings by William Larkin (1585-1619), for example that of Katherine Howard, Countess of Suffolk, whose hanging sleeves are not as long as Katherine Mompesson’s, and being slightly earlier still has the frill remnants of a skirt designed to be worn over a wheel farthingale. The use of a similarly pattern fabric may be seen in Gheeraerts 1615 portrait of Mary Throckmorton. The arched hood she wears is usually associated with mourning, and something similar can be seen in the 1622 portrait of Marie de Medici painted by Rubens. Her shoes have nicely defined heels. 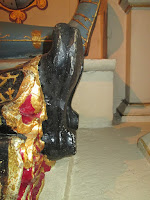 Elihonor was a resident of Salisbury Cathedral Close, and her tomb dates from 1622/3. She was, according to the inscription, “aged upon LXXX [80] years” when she died. Thomas Sadler was her second husband, her first having been Hugh Powell.(4) Both her husbands had owned the building in the Cathedral Close that now houses the Salisbury Museum. 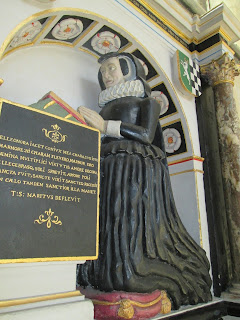 The sculpture is not as accomplished as that on the Mompesson tomb, and was overpainted at the same time in the 1960s. Elihonor wears as similar arched mourning hood to Katherine Mompesson, but it is much more stylised, and her hair looks very strange. Her gown is considerably less detailed than Katherine’s and shows the frill remnants of a skirt designed to be worn over a wheel farthingale.