Rachel, Countess of Bath: Accessories for a “super-rich” lady of the 1640s.


Everyone is aware of the modern idea of the super-rich woman being someone who thinks nothing of spending on a handbag, what for most people is a year’s income. As part of my researches for The Stuart Tailor I have been looking at the General Account Book of Rachel, Countess of Bath, for 1639-54, and she counts as mid seventeenth century super-rich, hubby is Charles I’s Lord Privy Seal. She was also one of the last people to have her portrait painted by Van Dyck, he returned to England in May of 1641, and was already ill. In her June 1641 accounts are two payments, “to Sir Anthony Vandick in part for my picture £10” and “to Sir Anthony Vandick for my picture £10, for the frame £4, to his man £1.” (1)  Van Dyck died in November 1641. The whereabouts of this painting are unknown, meaning that it is probably in a private collection somewhere. The picture on the right is from a 1870s photograph of the painting.

In some respects it is difficult to compare what Rachel is spending with the income of an ordinary woman of the time. A 1645 list of the servants at the Baths’ Tawstock estate shows three female servants being paid £2 a year. Women who were employed on an annual basis by the gentry Le Strange family of Hunstanton received between £1 10s and £2 a year, while the two female servants listed in the 1642 memorandum book of yeoman farmer Henry Best were paid £1 4s and £1 8s.  However as has been pointed out servants were provided with board, lodging and clothing in addition to this money. Day labourers also received food and drink as part of their remuneration and there was a statutory equivalent of the “minimum wage”. In Suffolk in 1630, for female reapers and binders of corn, this was 4d a day. (2)

So what, for Rachel, was the mid 17th century equivalent of a modern Hermes Birkin handbag? Here left is Hollar’s Winter from his 1644 seasons, and this lady is wearing examples of several items that Rachel buys, a muff, a fur stole, a hood, and shoes roses.

She buys a large number of hoods ranging in price from 3s for a black hood in 1639, to 12s in 1640 for a tiffany hood laced. In 1644 she buys three hoods for a total of 13s, of love, described by the OED as a thin crape or gauze material, of ducape, described by the OED as a plain-wove stout silk fabric of softer texture than Gros de Naples, and of sarcenet, which is a fine, soft silk fabric.

Looking at Winter’s feet the front of her shoe is covered by a shoe rose. In 1643 Rachel purchases “a pair of roses and 3 yards of pink coloured ribbon for your Ladyship bought at Mr Gumbletons 5s” The ribbon is probably for gartering, in 1644 she buys “gartering ribbons 7s”, and in 1650 “3 yards of blue gartering for my Lady 5s.” The shoes on the other hand are a lot less expensive, in 1644 “for a pair of shoes for your Ladyship 3s 6d”, even decorated shoes as in 1646 “for a pair of laced shoes for your Ladyship 4s” and in 1646 her slippers were 2s 6d.

In the winter engraving you can’t see the stockings, but Rachel’s are usually of silk at around £1 2s to £1 5s a pair. In 1639 we have “for 3 pair silk stockings £3 15s” and in 1649 “2 pair of silk stockings 46s,” there are other stockings listed. These silk stockings are in the Livrustkammeren in Stockholm and date from 1654.

You can’t tell if Hollar’s winter is wearing gloves but Rachel buys lots, “paid my glover 6th May 1641 £4 10 0,” and a 1646 bill has “paid for 12 pair of white and 11 pair of brown gloves Mrs Everatt 19s.”  These are probably the plain elbow length gloves that can be seen in this Van Dyck portrait of Anne Carr where the glove is shown carried. A slightly later (c1685-1700) pair, with a little decoration, survives in the Glovers’ Collection. 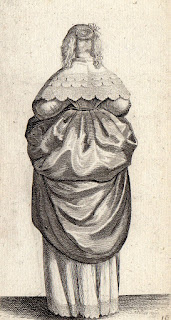 For her neckwear she has gorgets, these are deep, usually circular, cape like collars, as can be seen in this rear view from another Hollar engraving right. In 1640 she pays for a tiffany gorget 10s, in 1641 for making 2 gorgets & tiffany to one of them Miss Antony £1. Tiffany is a kind of thin transparent silk. Her neckwear wasn’t always of silk, in 1649 we have “for 2 handkerchiefs, cuffs and a gorget of plain Holland £2”

Rachel also purchases a sweet bag in 1640 for the sum of £6 10s. Sweet bags are small purses often given as gifts, and sometimes containing a scented “sweet powder,” enabling them to be put with clothing in the same way as lavender bags are used today.  Shortly after buying her sweet bag she spends £1 6s 8d on “silver and gold lace for my best sweet bag.” The Victoria and Albert Museum has an excellent collection of examples from the first half of the 17th century. Jacqui Carey has written a book on the whole subject of sweet bags. (3)
Finally we have Rachel’s jewellery. Her largest expense is in 1652 for “for one fair diamond £40,” but she buys a fair number of small, cheaper items. Some of these items must have been similar to what was found in the Cheapside Hoard. She buys pendants together with a mask for 10s in 1640, and in 1642 she spends 14s on “a cornelian ring & crystal pendants.” The Cheapside Hoard contains several pendants, for example in amethyst and emerald, plus a much cruder crystal pendant.  Two pair of pearl pendants where mentioned above in her 1647 shopping spree, and there is a pearl and wirework pendant in the Cheapside Hoard. (4)  In 1649 she spends £2 5s for “3 great pearls.” In 1652 she buys “two lockets £4 1s 6d”, and one can speculate as to whether the lockets might have been of the type circulating among royalist supporters after Charles’s death. The final entry for jewellery actually mention her jeweller, and goes into some detail as to what he is making for her, “£30 to Mr Grumbleton for 4 diamonds and making two pair of lockets the one 18 diamonds and the other 25 and 17 & a little ring 5s with 5 diamonds.”

Rachel often mentions where she purchases her items, the Exchange and Paternoster Row in London are mentioned. This engraving of the Royal Exchange, and with more detail Abraham Bosse’s engraving of one of the shops in the Galerie du Palais, show the sort of shop involved. However looking at some of her purchases, if you didn’t know, you wouldn’t realise, that most of the time there is a civil war going on.  Oh and the Hermes Birkin equivalent? I think it has to be the sable muff.