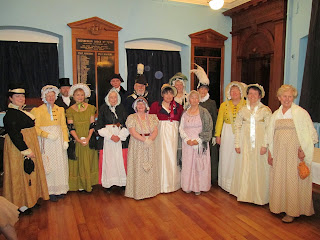 I have just returned from the Waterloo Study Day organised by the Costume Society in Bath, to commemorate the 200th anniversary of the Battle of Waterloo. As you can see from the photograph several members dressed in circa 1815 outfits for the day. The day was split with talks from Rosemary Harden, curator of the Fashion Museum Bath, and Nigel Arch, former director of Kensington Palace for the Royal Historic Palaces in the morning, and a demonstration of dressing an early 19th century lady and gentleman in the afternoon.


Rosemary Harden spoke about the Duchess of Richmond’s ball, which took place in Brussels just days before the Battle of Waterloo. She gave information on the ball itself, on the fashions in ball gowns around 1815, and finally on two ball gowns in the collection of the Fashion Museum, which were reputedly worn at the ball.  A photograph of the two dresses can be seen on the Costume Society’s page for the event. She spoke about the dresses, and the research she has done since an article on them was published in Costume. (Byrde & Saunders, 2000). The family history the donor was that the dresses were worn by the sisters of a Mr. Perceval, and there was an Hon. Mr Perceval on the invitation list for the ball, but he cannot be pinned down, and nothing can be proved, though the dresses are the right date and style.

Nigel Arch spoke about the battle itself, and the uniforms that were worn at the time, describing them as fashionable, magnificent, but not practical. He described how certain elements of central European dress ended up in western European military uniform, the shako, the sabretache, and hussar uniform. He explained how the different armies wore different coloured uniforms, and why this might have come about. Nigel has written in the past about the use of the red coat as a brand for the British army. (Arch, 2007) 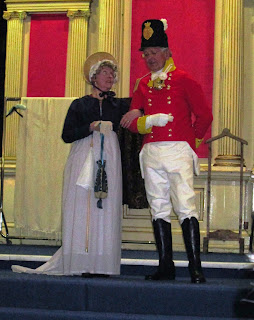 In the afternoon we had the on stage dressing of two people from the shirt out in the case of the gentleman and from the shift in the case of the lady. The two can be seen fully dressed to the left. The gentleman’s outfit was based on an original in Salisbury Museum, a militia coat that had belonged to a Captain John Swayne. The lady’s outfit was based on a morning dress of c.1798-1805, also in Salisbury Museum, and re-created from the pattern taken by Janet Arnold (1977).