The 17th century equivalent of the modern carrier bag was the shopping basket in rush or wicker, in fact baskets have been described as “One of the most important containers in the early modern period both for storage and carriage”. (British History Online, 2015)

The OED describes a basket as being “A vessel of wickerwork, made of plaited osiers, cane, rushes, bast, or other materials.” Bast is flax, hemp, jute and similar plant fibres. Osiers or withies are specifically flexible willow twigs or branches. Basket making was a fairly well represented craft, there were eight basket makers listed in the 1608 muster list for Gloucestershire. (Tawney, 1934)

England did not produce a collection of genre paintings in the way that many European countries did so we have little in the way of visual evidence for what was used. Most people will be aware of the 1640 Hollar engraving from the Ornatus Muliebris of the maid with her rush basket, others will be aware of the various Cries of London series, showing women with baskets on their heads. Here we have baskets for two different functions; the first is for putting your shopping in, the other is for taking goods to market, or from one place to another, the equivalent of the old costermonger basket.

The costermonger style appears in many European Cries as well as the London ones. Possibly the oldest of the “Cries” are these Parisian ones in the Bibliotheque Nationale, which as the text says are gendered, in that the women are more often shown carrying goods in a basket or pot on their head, while the men are more often shown carrying goods on their backs. For a quick history of Cries have a look at Shesgreen (2013)

There are several series of Cryes of London and, as Shesgreen has said, each “is a synthesis of its precursors.” (1990) An early 17th century series sold by Richard Newton includes 12 women in the set, half hold things in their hands with no carrier, 4 have baskets over their arms (see the oyster seller left) and 2 carry baskets on their heads. The Manner of Crying Things in London, sold by Peter Stent, shows no baskets over the arm, though one is held under the arm, and one of the four women with a basket on her head has a basket with a central handle implying it could be carried over the arm. Stent opened his shop in 1642 and died in 1665, the Stent collection of prints was sold to Overton by his widow. (Globe, 2008) (Clayton, 2008) In contrast to the Stent Cries the c.1667 Common Cryes of London, printed by John Overton, shows  eighteen women, 8 carry baskets on their heads, 9 carry baskets, or something similar, over their arms, and one carries goods loose. A late set of cries by Marcellus Laroon are the most naturalistic. These were published in 1687; six of the women in the series carry baskets over their arms. In all these cases it is as well to remember that they are not women shopping, they are women selling; however they show the types of baskets available to the housewife, especially in the case of Laroon's basket seller, who not only has a load of different table baskets on her head, but also carries some straw hats, see below. 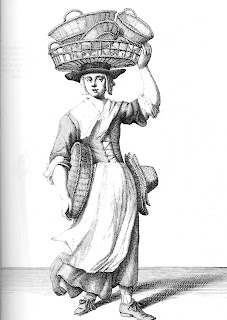 So that is what market criers and traders are using, but what about the “housewife” doing her shopping. Hollar’s Theatrum Mulierum and Aula Veneris would appear to indicate that carrying a basket is widespread in Western Europe across a range of social levels, from the merchant’s wife in Holland, the woman of Antwerp, the country woman in France to the servant maid in Cologne, not to forget the English kitchen maid from his Ornatus. There are two paintings by the French artist Louise Moillon which show a range of baskets, top right you see her Scène de marché avec pickpocket dating from the 1630s, the purchaser has a lidded wicker basket over her arm, while the seller has a range of baskets containing vegetables and fruits. Have a look also at her La marchande de fruits et de légumes