We revisited the wonderful Musee le Secq des Tournelles in Rouen, a must visit if you are in the town. The Le Secq des Tournelles, father and son, were nineteenth century collectors of wrought, gilt, silvered and cast iron. The collection was given to Rouen in 1917 and has been on display there since. There are fine examples of sewing and needlework scissors on display. 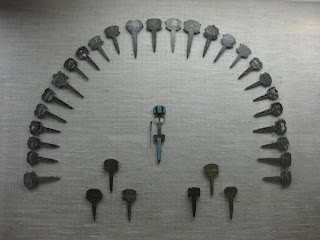 The photo to the right is of 17th and 18th century scissor cases; there is a matching display of the scissors which I don't include. These cases though engraved and filigree are relatively plain, it you want to see what can really be done with them have a look at a c1650 case in the Victoria and Albert Museum, in enamelled gold decorated with tulips and other flowers. Could this be a case for the type of “Little French scissors” that one of Ralph Verney’s sisters asked him to send her when he was in exile in France at the time of the Civil War. This style of scissors, with or without a case can been seen hanging from women’s waists, as for example in the one of the Hollar engravings, which is from his Ornatus Muliebris Anglicanus, The Several Habits of Englishwomen, 1640. 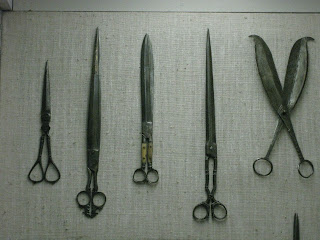 These are all small pivot style scissors. Larger pivot style scissors can be seen in the photo to the left. Another pair of these, helpfully engraved with the date 1636, is in the Metropolitan Museum. The more ornate scissors would have been more expensive, but basic scissors appear in the probate inventory of the chapman Richard Riddings at 1 penny a pair in 1680.


The other style of scissors are shears, made in a single piece. The two central shears in the photo below are 16th century, and very similar to those that appear in the famous painting of a tailor by Moroni in the National Gallery, the Gallery have put an item about the painting on YouTube. 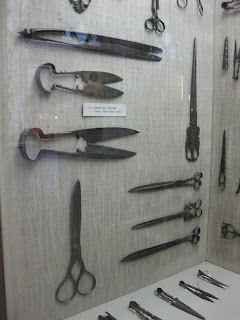 Spufford, M., 1984. The great reclothing of rural England: petty chapmen and their wares in the seventeenth century. London: Hambledon Press.