Doris Langley Moore and the Museum of Fashion at Bath

I spent a pleasant afternoon at the AGM of the West of England Costume Society where Rosemary Harden, curator of the Fashion Museum at Bath spoke about the origins of the Fashion Museum, which is celebrating its fiftieth anniversary in the Assembly Rooms, and the museum’s creator Doris Langley Moore.


Doris Langley Moore’s collection started with fashion plates, but in 1928 she took part in a game of charades, and her hostess was so surprised that Doris could get into one of the garments that she had supplied for the protagonists to use, that she gave her the garment. Some months later Doris purchased another vintage gown which she was planning to cut up, however she balked at the idea, and thus her collection began. 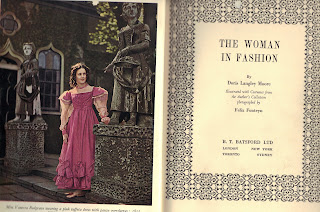 Mrs Langley Moore had a wide collection of friends and acquaintances in the artistic and theatrical world of London, and when she published a book about her collection in 1949 – Women in Fashion - items from her collection where modelled by luminaries of the time such as the ballerinas Margot Forteyn and Beryl Grey, actresses Rachel Kempson and Vivien Leigh, the opera singer Elisabeth Schwarzkopf and many others. The young lady on the title page above is Vanessa Redgrave. Rosemary commented that many of the dresses in the book are no longer in the collection as it was never static. Mrs Langley Moore often sold off items as well as purchasing.


Even at this date Mrs Langley Moore was looking to open a museum. She acquired an Arts Council grant and was for a short period based in London, but in 1955 the collection moved to the home of the Marquess of Abergavenny at Eridge Castle in Kent, where it was opened by the Queen Mother. It was while the collection was at Eridge that a series of four, fifteen minute television programmes based on the collection where made. They were unusual in that, although there was no colour television in England at the time, they were made in colour. They can still be seen via the BBC archives.


The collection moved again, being based for a short period at the Royal Pavilion Brighton, before finally coming to rest at its current home in the Assembly Rooms in 1963. From that date on the Museum has instituted a “Dress of the Year” where a current fashion is chosen by a fashion journalist as exemplified by an outfit, from Mary Quant in 1963 to Sarah Burton in 2011. This year the museum is celebrating its 50th anniversary with an exhibition of “50 Fabulous Frocks” which opened today.
Posted by Pat Poppy at 21:44