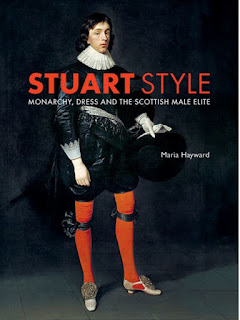 The first section of the book, entitled ‘The evolution and significance of Stuart style’, gives each of these five men a chapter, examining their individual styles, and the influences upon them. With James VI & I the author points out that many dress histories look only at James’s time as King of England, and ignoring his time as King of Scotland. Also examined are the influences of their Scottish heritage in the styles they developed, and what was and wasn’t exported to England and specifically to London.

The second section is entitled ‘Creating the Stuart look.’ This looks at how the Stuarts chose their textiles and clothes, at who supplied the items, their tailors, embroiderers, jewellers and perfumiers, and also at how the clothes were maintained, ranging from the role of the gentlemen of the robes through to the laundresses. There is also a chapter on the Stuart use of jewellery, and on the use and wearing of honours; the Garter, the Andrew and the Order of the Thistle.

The third and final section is entitled clothes on show: the space and places of Stuart masculine display. This covers the importance of the King’s bedchamber and dressing rooms, and how what was worn could be used to impress, to make a statement, or to show an allegiance. The importance of religion and the ceremonial in what was worn is also examined, together with the markers of life, from christenings to funerals and mourning.

The book is extremely well illustrated, with a timeline at the end matching decades to fashionable garments, linens and accessories.
Posted by Pat Poppy at 15:15