Printed fan leaves of the 1630s by Abraham Bosse 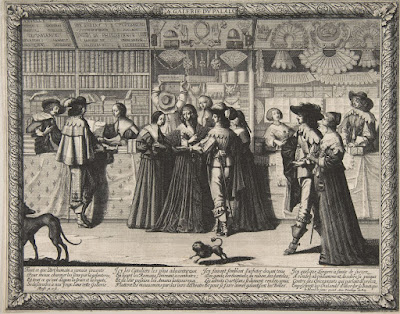 The famous engraving by Abraham Bosse (1602-1676) of people shopping in the Galerie Royale shows three booths. On the left a bookshop, on the right a booth selling collars, neckerchiefs and lace, and in the centre a booth selling gloves and fans. In the centre foreground a gentleman, a lady and her maid servant are admiring a fan. Behind them in the booth a server is taking down a box labelled Eventails du Bosse [fans by Bosse].

Bosse is know to have engraved at least two series of leaves for folding fans, and some for fixed fans. One series shows scenes from classical mythology. A leaf dated 1638 in the Museum of Fine Arts Boston has a central cartouche showing the Birth of Adonis, with Daphne as a tree giving birth, surrounded by four winged figures and Venus. The smaller cartouches either side show Venus, Adonis, and Cupid on one side and Venus with a sleeping Adonis, Cupid and a chariot in clouds. The rest of the leaf includes swags holding floral emblems surrounded by cupids. Another Bosse fan leaf depicted in Helene Alexander’s book Fans (Costume Accessories Series) and dated 1637, has a central cartouche representing the Judgement of Paris.

Seventeenth century life appears in another series by Bosse. One leaf also dated 1638 and also in the Museum of Fine Arts, Boston, shows the Four Ages of Man. On the left a woman looks into a very grand cradle, while a group of children are shown behind her including one playing a drum. Next there is a courting couple with a cupid. The centre of the leaf shows a grand house in the distance. Centre right the couple are now a family with two children, and far right an elderly couple sit on chairs. The figures on this fan leaf seem to follow from a series of engravings Bosse did on the Ages of Man in 1636, so the courting couple echo the engraving of Adolescence, while the cradle is similar to the one in his engraving of Childhood.  The elderly couple sitting by a fireplace seem to be almost a reverse image of the pair in his engraving of Death. 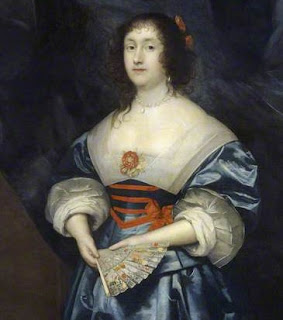 These fan leaves would have been painted and mounted on sticks, so that the leaf in use would appear similar to this detail from Cornelius Johnson’s 1638 portrait of Diana Cecil, Countessof Elgin, shown left