Review of Patterns of Fashion 5 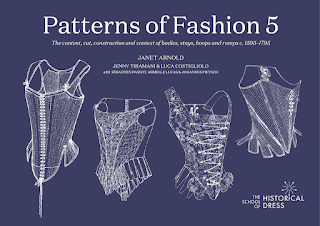 I have had my copy of this for a few weeks now; it is an absolutely tremendous resource. It examines forty one surviving items.  The first twenty one pages are an introduction to the subject including such things as the terminology used for the different parts of the garments, the materials they were constructed from, and the examination of surviving drawn and printed patterns. There is also information on staymakers themselves, their customers, and how to put on stays. The last section of the introduction looks at hoops and rumps.

Pages 30 to 152 form the bulk of the book, looking at the forty one surviving garments, divided into two sections the bodies and stays, and the hoops and rumps. Many of the garments have not had patterns taken from them before, several of them have but in far less detail. For each garment there are a large number of colour photographs of the original and portraits of similar items being worn, plus a pattern with detailed notes.

The Elizabethan/16th century garments
There are three Elizabethan period items: the Dorothea Sabina bodies that appeared in Patterns of Fashion 3, the Elizabeth effigy bodies that were first examined in Costume, vol.41, 2007, and a Spanish farthingale of linen stiffened with ropes of bents.

The Stuart/17th century garments
There are thirteen seventeenth century bodies or stays, plus an ivory stay busk in the book, but there are no hoops from this period. There are two distinctly Dutch/German stays from the museum in Darmstadt, of the type that can bee seen in the portrait of Rubens with Isabella Brandt. The other stays are mainly in English or private collections. The garments include the stays that were found under floorboards in Sittingbourne.

The Georgian/18th century garments
There are fourteen eighteenth century stays, ten hoops and one rump. They are from a wider range of museums including those in Stockholm, Munich, Paris, Toronto, New York, Boston and Williamsburg, as well as British museums.

Codicil: the last nine pages
In this section is information on taking measurements, on the scales of the various patterns, and on the drafting of patterns.There are photographs showing reconstructions of some of the garments. There is a two page multilingual (English, French, German, Spanish, Italian, and some others) vocabulary of terms, and finally a page of references.

Ordering
The book can only be ordered from the publisher, The School of Historical Dress, for more information go to https://shop.theschoolofhistoricaldress.org.uk/
Posted by Pat Poppy at 16:54