Two Exhibitions: Charles I: King and Collector and Charles II: Art and Power 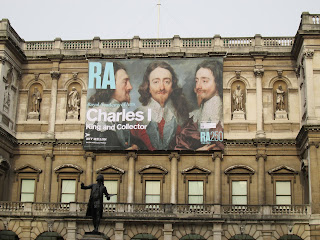 Charles I was an eclectic collector and the ten rooms at the Royal Academy bring together many of the items of his collection that were sold by order of Parliament after the King’s execution. Many are back in the Royal Collection, but other have been borrowed from museums across the world. As an interesting side note the catalogue of the collection, taken in 1637, still exists and many of the items have a comment saying where the painting was originally displayed.

The exhibition starts with the fantastic triple portrait of Charles by Van Dyck, which is also the poster for the exhibition. The painting was for Bernini to sculpt a bust of Charles. The bust was lost in the great Whitehall fire of 1698, when much of the Palace burnt down, and though many have berated Cromwell for selling off the collection, one wonders how much more would have been lost if they had still been in Whitehall.

The start of Charles’s collecting career was when, having gone to Madrid in 1623 for marriage negociations, he came back with paintings by Titian, Veronese and others. He also purchased six of the Raphel cartoons for the Sistine Chapel tapestries, for £300, and the Mortlake tapestry workshop founded by James I in 1619 copied these, one room is dedicated to Mortlake Tapesteries.  In 1627-32 Charles purchased the Gonzaga collection from Mantua, including  Mantegna’s Triumphs of Caesar, which have a whole room to themselves at the exhibition.

Other rooms in the exhibition include two of Italian Renaissance paintings, one of Northern Renaissance, and a room containing works that had originally been in the Queen's Hose at Greenwich. There are also vast amounts of Rubens and Van Dyck, including Van Dyck’s “Greate Peece” of 1632, and his painting of the two sons of the assainated Duke of Buckingham (shown left).

The Charles II exhibition starts with less of a bang than his father’s. The first room contains many prints, rather than paintings, including The Act abolishing the King,  and for even handedness Eikon Basilike, it also has the last portrait made of Charles I in his lifetime. However when you get into the room with John Michel Wright’s portrait of Charles II, Charles II dominates. The art, generally speaking is not as good as in the Charles I exhibition, though it does have the wonderful Leonardo da Vinci  drawing and many of Holbein’s drawings. Much of the portraiture of Charles court is by Lely, Kneller, Wright and Cooper. There are many depictions what is happening for example, Charles setting off for England in The Embarkation of Charles II at Scheveningen, and the Anglo-Dutch Wars of the 1660s in Holme’s Bonfire, and a couple of unusual portraits, The Chinese Convert by Kneller  and Bridget Holmes aged 96 by Riley.

Much of what is on display is on the Royal Collection’s excellent website for the exhibition. Also you can take photographs at the Charles II exhibition, you can’t at  Charles I.
Posted by Pat Poppy at 20:29