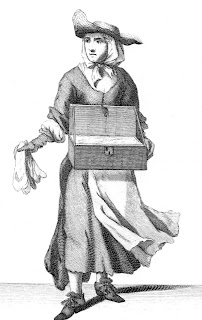 Analysis of the Stratford upon Avon inventories for the Stuart Tailor has turned up a rare female pedlar or chapman.(Jones, 2002) When Avis Clarke was buried in Stratford in 1624 she was described as a “stranger”, however her executor Robert Johnson, a furrier, appears to be one of the three Robert Johnsons living in the parish in the early seventeenth century.

There are only two female pedlar/chapmen trading in their own right, as opposed to with a husband, in Margaret Spufford’s (1984) work. Joan Dant, a widowed Quaker of London, was worth over £9,000 at her death in 1714. The other chapman in Spufford was also named Clark, Ann Clark of Donnington, Lincolnshire, who died in 1692. She also appears to have been a much richer woman than Avis, her sale goods were worth about £40, and her tilt cloth probably means she was more likely to have been a market stallholder.

Avis describes herself as a spinster in her will, and her inventory consists solely of her wearing apparel (16s), an old pair of sheets and a blanket (2s), and her box and its contents. The total of this inventory £3 3s 7d, would seem to indicate that she was not a rich woman. In her will however she leaves 5s and all her wearing apparel to her servant, Mary Beddson, who presumably lived
wherever Avis was based. Mary Beddson’s family came from Wootton Wawen about seven miles to the north, north west of Stratford. Avis also left 5s, a band, a handkerchief and a pair of garters, “that I have in my box”, to Peter Woodhouse, who is described as a chapman of small wares. There is no indication of the size of her box, but one can speculate that she may have sold from it, like Laroon's 1687 London seller of socks. (right)
None of Avis’s goods were expensive.

So what did Avis have in her box:

Coifs and Cross Cloths
Avis stoked four types of coif, she had 9 coifs at 3d each, 6 “playne” coifs at 4d each, 9 coifs of black and tawny also at 4d each, and eleven “drawne work” coifs valued at 3s, which does not divide evenly, but would be about 3 ¼d each.

Avis has six “crest clothes” for 12d, so 2d each. Cross cloths, are sometimes called forehead cloths, as referred to by Fynes Morison in 1617 “Many weare such crosse-clothes or forehead clothes as our women use when they are sicke.” They are often listed with coifs, and the Victoria and Albert Museum show matching sets that survive. Full details and a pattern for the set linked here can be found in North and Tiramani (2011)

Handkerchiefs and handkerchief buttons.
As mention above Avis left Peter Woodhouse a handkerchief, one of six she had in stock worth 4d each. She also had “on papear of hancharves buttones xviiid” The fashion for putting buttons on handkerchiefs started towards the end of the 16th century and lasted into the middle of the 17th century. A 1659 satirical account quoted in Cunnington (1972) has “for six dozen of large fine holland handkerchiefs with great French buttons, for Lord Fleetwood, to wipe away the tears from his Excellence’s cheeks.” 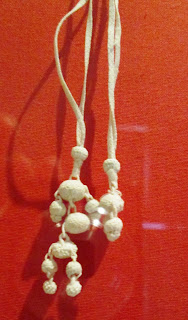 Again Avis left Peter Woodhouse a band in her will. She had 13 bands in stock, valued in total at 3s, again this does not divide equally, but would make them worth about 2¾d each. She also had a dozen bandstrings valued at 18d, so 1½d each. These would have been very simple and would probably have borne little resemblance to the ornate bandstrings in the Platt Hall Collection, shown left.

Garters
Avis has an unspecified amount of coarse gartering for 20d, and “sixe peare of garters 3s”, equalling 6d a pair. She also has five other garters, it is not specified whether these are in pairs or not, for 12d. Several garters survive in museum collections bearing the word Jerusalem, as in this example, dated 1649, in the Colonial Williamsburg collections. The V&A Museum has two of these Jerusalem garters dating from 1677 and 1678.

Points
Points were used to hold breeches to doublets, few survive. Braun et al (2016) has a close up photograph of the Sir Rowland Cotton trunk hose with canions, showing a single plain table woven silk point still attached to the right hand side of the waistband, unfortunately the photograph is not on the V&A webpage for the outfit.   Avis has in her box “sevein dison of poyntes” so 84 points for 1s, these were probably linen as she also has a mere nine silk points for 1s.

Gloves
Avis has 6 pairs of gloves for 10d, these are very cheap gloves, though in 1612 John Fleming of Marlborough had gloves at 2d a pair. (Williams and Thompson 2007) 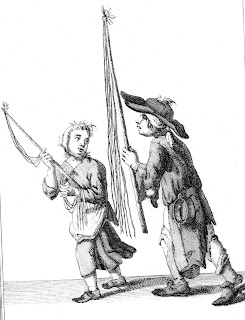 These are three actually quite different things. Laces were used to lace together garments, shoes, and so on, as shown in Laroon’s drawing of ragamuffin London lace sellers (right). Avis had “Seven dusson of lasses 2s 4d”

Lace could also mean any form of tape or braid. The word inkle also refers to narrow woven tapes. These could be used decoratively, as for example at a much higher social level, King Charles I’s “suite of deere cullor silke moheire with two gold and silver laces ten times sowed on.” (Strong 1980) Avis has four and a half dozen of loom work lace for 4s, 6 yards of loom work for 1s, and two dozen of white inkle for 1s, she also has “other shreds of lase and calleco 1s”

Avis also has lace in the sense of bobbin made lace, listed as forty two yards of “bonlase” for 4s, which is less than a penny a yard. Elizabeth Isham’s letter to her father, with samples of lace attached, has a cheap, very simple 2d lace.(Levey 1983)

Sewing and miscellaneous items
Avis’s box contains 2d worth of pins, an ounce of thread for 8d, thimbles and “to bound graseies” for 4d. It is unclear what graseies are.