A History of Fashion in 100 Objects– New exhibition

This recently opened exhibition at the Fashion Museum Bath is on until the 1st January 2018, and includes considerably more than one hundred objects. This is because the cases of accessories are not included in the total, so for example the first case contains several 16th and 17th century gloves from the Spence Collection. As can been seen from the photograph the light levels are very low because of the fragility of the fabric displayed. 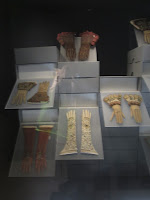 The first case of large garments contains the wonderful late 16th/early 17th century embroidered jacket, which appears in the centre of the advertising for the exhibition. It is followed by a rare 1690s crewel embroidered petticoat, which shows how English embroiderers were copying the designs of the painted calicoes that were coming into the country in even increasing numbers at that time. The next garment is a lady’s sleeveless waistcoat, worn underneath for warmth; it is embroidered with a stunning design of crane-like birds. It can be seen in greater detail in the image gallery on the museum’s website, which has images of 36 items in the exhibition. The c1700 man’s sleeved waistcoat, which is displayed behind these two garments, is rather too far way to be seen in detail. 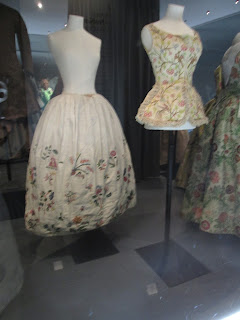 The exhibition is well worth seeing, though if your interest is early modern it is, unsurprisingly, very heavy on the 19th and 20th centuries, with only about 25 garments that are pre 1800. You can take photographs, but the glass is very reflective, as you can see from mine here, and the lighting levels are very low.
Posted by Pat Poppy at 20:53