A waistcoat, a nightcap and a pair of slippers from the 1640s. 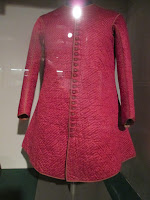 The collector Sir William Burrell (1861-1958) purchased these three items in 1937. They, with his collection, were gifted by Sir William and his wife to the City of Glasgow. The Burrell Purchase Book states that these were purchased from a direct descendant of Colonel Thomas Veel (1591-c1663) of Alverstone near Bristol. The comment is that Charles left them, perhaps as a gift or memento, after he had stayed with the Colonel in 1645. At that time Charles had travelled from Oxford as head of the Western Association, and it is known that the army stopped at both Bridgewater and Bristol. Whether they actually belonged to Charles is not provable. They are described by the curator as “relatively small for a man. However, Charles was only 15 in 1645.” (Quinton, 2013) 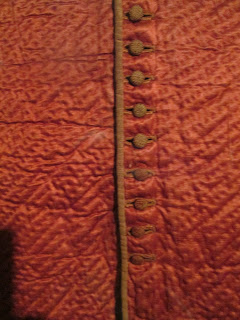 The waistcoat
The waistcoat is a vibrant pink/red silk satin with an interlining of wool and linen, and was lined with a tabby weave pink/red silk, of which little remains except around the buttonholes. I have not seen the interior, thought the plain linen interlining can be seen inside the sleeves at the wrist. It is edged, and the seams are covered, with a narrow silk braid. It looks as though the buttons, which are somewhat flat, are covered with the same silk braid. It is quilted with zig zag lines worked in running stitch. 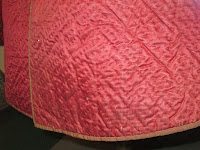 The Burrell’s online description http://collections.glasgowmuseums.com/starobject.html?oid=36161 says that the lack of a waist seam is unusual at this date, but it is certainly not unknown. The back and front panel of a 1630s doublet in the Victoria and Albert Museum, doesn’t have a waist seam, the pattern for this is diagram VIII in Waugh (1964). Also the 1644 burial doublet of Pfalzgraf Johann Friedrich has the front and back panels cut in one piece. (Stolleis, 1977) The suggestion made by the museum is that it was perhaps made to be worn under a buff coat. There is a cream worsted waistcoat/coat of a similar date (1630-1650) in the V&A, but the museum’s online description is not very helpful. The sleeves of the waistcoat are cut with a curve, and fasten with four buttons at the wrist. There are 25 buttons down the front of the waistcoat.

The nightcap and slippers 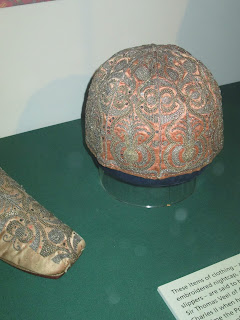 The nightcap and its matching backless slippers are made in pink silk satin. They are embroidered with a design which has been identified as a pineapple. (Quinton, 2013).

The nightcap
The nightcap is made from eight panels and has no brim. This brimless style is similar to others of the middle decades of the seventeenth century. Another also in the Glasgow collection  is reputed to have belonged to Major Hugh Buntine, who was part of Leslie’s army in the Civil War.  The embroidery on the nightcap involves couched loops of silver and silver-gilt thread, and spangles. It is lined with a tabby weave yellow silk. 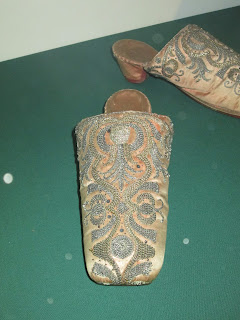 The slippers
The slippers are backless, and heeled, a fairly common style in the mid 17th century. There is another, but plain, pair in the V&A, that were originally salmon pink. Later pairs, like these in the Museum of London, have a squarer toe. Other pairs of slippers exist from the seventeenth century, for example the pair owned by Sir Francis Verney that are at Claydon House.