A Visit to South Devon


I recently visited south Devon and some museums and costume collections in the area.

Totnes Fashions and Textiles Museum
The museum is housed opposite the market square in Totnes. It has the Devonshire Collection of Period Costume. There are three rooms upstairs which have an exhibition that changes every year. The exhibition for 2015 is Corsets and Crinolines; it ends on the 2nd October. The display shows on one mannequin an outfit, and on the next mannequin what would be worn underneath to produce that shape. The earliest garments in the exhibition are mid 18th century. Unfortunately the museum is not open at weekends; you can tell when the museum is open by the “dancing” puppets in the window, if they are moving the museum is open. 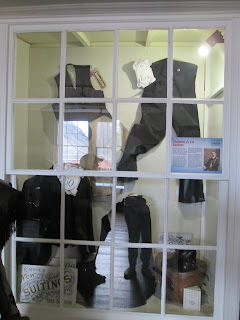 Totnes Elizabethan House & Museum
Although not a costume museum the Elizabethan House, built c.1575, just down the road does have some clothing in its exhibits, including this “window” display shown left of Thomas and Company who were local tailors. The theme garden outside has a bed of plants used as dyes.

Killerton House
Killerton is an 18th century house with large gardens that has been owned by the National Trust since the middle of the 20th century. The fashion collections held there include the Paulise de Bush costume collection. The upstairs has an exhibition of clothing which changes every year, this year’s exhibition 'The F-word: The changing language of fashion' explores how revolutionary innovations in fabric, cut and fastenings have changed the shape of fashion. The items on display run from the 18th century through to the 1990s. There are some fascinating film clips showing on a loop including a 1940s film showing how zip fasteners were made and a 1920s clip showing how early plastic buttons were made. For more information about the exhibition have a look at the article on the website. The photograph above shows one of the cases.
Posted by Pat Poppy at 21:25