Probates inventories as a source of clothing information: a 1550-90 Oxfordshire case study.


Probate inventories are a wonderful source for information on clothing, however they have their limitations, as Spufford (1984) said, “Inventories are too useful not to use, but when they are used heavily...it cannot be sufficiently stressed that their apparent tidiness and suitability for the historian seeking quick economic comparisons in fact conceals quicksands of very considerable magnitude.”
This is an analysis of the clothing listed in a series of Oxfordshire probate inventories. (Havinden, 1965) These inventories are from the diocesan court and peculiar jurisdictions of Oxfordshire, and there are 259 of them. Although they cover the period 1550 to 1590 the bulk of the inventories are overwhelmingly from the 1570s and 1580s.

The most of the people whose inventories appear are of the “middling sort”, tradesmen, craftsmen, husbandmen and farmers. Obviously, generally speaking the poor did not make wills, though there are some day labourers among the inventories, and the lowest valuation is for a mere 14s 8d. The richer merchants and members of the gentry and nobility also appear rarely, as their wills were more likely to be proved in the Prerogative Court at Canterbury. Only four people are described as gentlemen and none of these has a total worth of more than £48. Forty two of the inventories are from women, just over half (24) are described as widows. While it would appear that there is a general relationship between occupation and value, it is not particularly obvious. The richest person, worth £590 18s 1d., is a widow. The next richest is a yeoman farmer worth £408  0s  2d., only ten of the inventories are valued at more than £100, while 62 are valued at less than £10.

Of the 259 inventories 99 do not list or give any value for clothing, and 120 give just a total value for a person’s wearing apparel, or similar phrase. This means that only 40 inventories actually list any clothing. Are these valuations any indication of what a person’s wardrobe is actually worth?
The range is considerable 6d to £23. The lowest valuation, the 6d, relates to “an old jerkin” belonging to William Mosley a carpenter, in his 1578 probate, his total worth was £28 6s 6d. The most valuable wardrobe, £23 belonged to the richest person on the list, the widow Katherine Doyle, her 1585 inventory specified that she had “woollen apparell £20”, her wearing linen was worth £3, and she also had jewels worth a further £37 12s-8d.

However most people get a value that may well have been picked out of thin air. Thirty one have a valuation of £1, this is the commonest valuation and is applied to people whose total worth is anywhere between £4 1s 0d and £84 2s 0d. The next commonest valuation was 10s (17 people), followed by 6s 8d (a third of £1; 16 people), then 5s (13 people) and 13s 4d (two thirds of £1; also 13 people). These round figures do not seem to indicate that that a great amount of thought has gone into valuing the wardrobes.

What clothing is listed in the inventories?

For men’s clothing the most common items are 31 shirts. For legwear there are 29 pair of hose, 10 pair of stockings including one listed as nether stocks, 6 pairs of breeches, and one pair of galyskins. For the body there were 25 doublets, 21 coats, 21 jerkins, 2 jackets, 1 waistcoat, 15 cloaks and 13 gowns. In addition three men had 4 petticoats between them.There were also 2 suits, one of satin and one of fustian that belonged to a gentleman who died at an inn, he also had a pair of velvet breeches and a trunk containing the rest of his apparel, the contents of which were not detailed. For head wear there are 12 hats, 3 caps and 1 night cap. For the feet there were 8 pairs of shoes and 3 pairs of boots. In accessories we have 9 bands, 5 partlets, 3 ruffs, 2 kercheifs and 2 handkerchiefs. Three people mention a total of 4 trusses, and truss in the sixteenth century has more than one meaning, so we don’t know what these are. The three definitions of truss that we have are 1) In Florio’s 1598 dictionary The World of Worlds Cotigie, is translated as “leather hosen, or trusses such as our elders were woont to weare”. 2) In 1552 Huloet describes it in its modern sense as a support saying, “trusse for a wrestler, or diseased body.” 3) Drayton’s Polyolbion of 1612 seems to indicate something more in the way of body wear saying “vnto his trusse, which bore The staines of ancient Armes.” One man owned  “2 payer of rofes and a lymbyck,” the ruffs are self explanatory but what is a lymbyck? The nearest thing that can be found is a limbec used in distillation, but nothing to do with clothing. 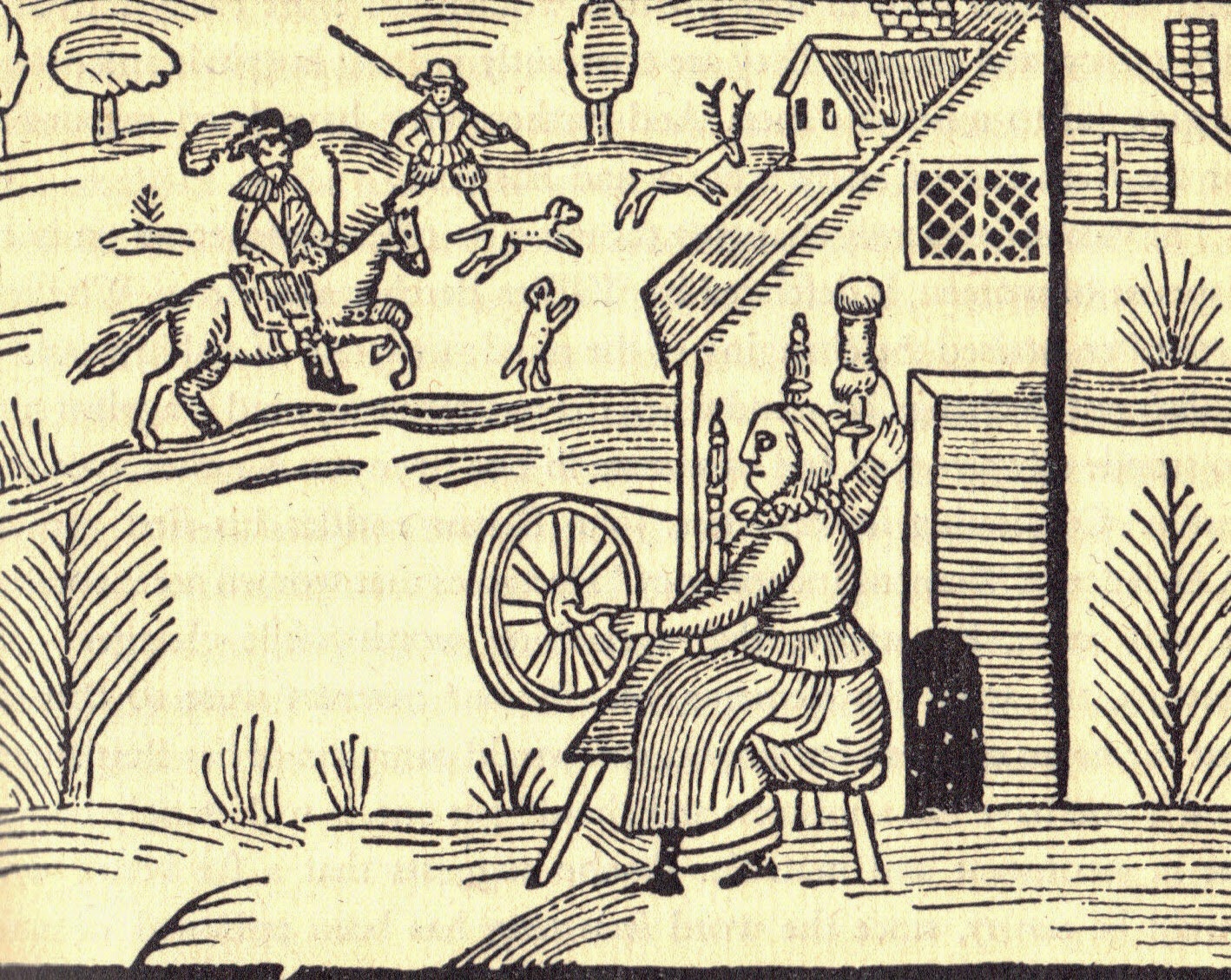 For women’s clothing, in underwear we have 14 smocks. For the main garments there are 8 gowns, 3 kirtles, 3 cassocks, 17 petticoats, 3 cloaks, a waistcoat and a frock. To go with some of these there are 9 foresleeves listed separately, and for wearing over the garments 16 aprons. For the legs and feet only 2 pair of hose and 2 pair of shoes are recorded. For the head 1 cap, 2 hats and 6 headcloths. For the neck there were 30 kerchefs, 13 neckerchefs and 7 partlets. Garments that require a little more explanation are the 18 rails and 1 tippet. Rails come in different types, there are head, neck and night rails, but in these probates they are only listed only as rails. Palsgrave (1530) gives a “rayle for a woman’s neck,” while Massinger (1630) gives “sickness feign’d that your night rails of forty pounds apiece might be seen.” The Egerton MS of 1588 has a charge for “mending, washinge and starching of a head raille of fine white sipers.” The Willoughby MS in 1552 has a purchase of “hollan cloth to make niyght rayelles and nyght kerchers.” They could also be worn by the poor as evidenced by a quote from Nashe (1592) “A course hempen rail about her shoulders.” A tippet is described by the OED as “A long narrow slip of cloth or hanging part of dress, formerly worn, either attached to and forming part of the hood, head-dress, or sleeve, or loose, as a scarf or the like,” which covers most of the possibilities.

What clothing is NOT listed in the inventories?

It is interesting just to see what is missing. It is a very small sample but even so I would have expected to see some gloves. In 1608 one county Gloucestershire had 145 glove makers. The upper classes bought often gloves a dozen pair at a time. They were given as favours as weddings and at funerals. The merchant tailor Henry Machin records 100 pairs being given at the wedding of another merchant’s daughter. For women’s headwear although there are 6 headcloths, there are no coifs.
Fabrics and colours
Fabric and colours are rarely mentioned. The most common fabric to appear in the probates is frieze, a woollen cloth with a nap usually on one side, this was used for 3 coats, 2 gowns, 3 jerkins, 2 pair of breeches, and 1 male and 2 female cassocks.   Cloth was mentioned twice, once for a jerkin and once for a gown, and leather was also mentioned twice, for a jerkin and a doublet. Worsted and canvas are mentioned for doublets. Russet appears twice, and here we have a dichotomy, is it a fabric or a colour, the russet coat is probably the fabric, but the silk russet cloak is more debateable. One pair of stockings are described as knit, and four of the aprons have fabrics, 2 linen, one worsted and one flannel. Apart from white, grey and black only one colour is mentioned, and that is red for 3 female petticoats.

Why are things listed?

Why only 15% of the wills have clothes listed we don’t know. Obviously some of the people taking probate inventories didn’t think that clothing was important, 38% didn’t give any value for clothing, and 46% only gave a total value. Some people may indicate why there was a problem, as in William Cosynne’s 1582 inventory where it is stated, “besides suche goodes as are in the howse which at this time the administrator dare not enter upon.” Some administrators start a list, and give up, as in “two shurtes and an ol payre of hose with other such lyke 5s 0d,” or, “other trashe aboute the house 2s.” One point to take into consideration is that from 1530 to the Civil War there was a fee for probate. Estates under £5 in value were free apart from 6d for a copy of the will, between £5 and £40 the cost was 3s 6d and over £40 it was 5s. (Heley, 2007) Cox and Cox (2000) consider that there may be an effect caused by the fact that, if no inventory is taken and debts are more than the estate is worth, the administrator is liable for the difference. However probate inventories do give a good insight into what was being worn, and by whom.