A Sixteenth Century Mitten from London – with pattern


Among the collection of sixteenth century knitted items in the Museum of London is a child's knitted mitten found at Finsbury. It looks as though it could have been bought from Marks and Spencer, but is over 400 years old.  A similar mitten of a similar date is in the Norwich and Norfolk Museums’ collection, and a pattern for this has been published. (Huggett & Mikhaila, 2013)


The Museum of London mitten is 13 centimetres (5 inches) long by 7 centimetres (2¾ inches) wide including the thumb, and therefore probably belonged to a child of about five years of age.  Unfortunately the MoL has not put a measure in the photographs of it, but from the known width it would appear to be knitted at around 12 stitches to 5 centimetres (6 stitches to the inch)

The mitten is knitted in pale brown wool, with a three row decoration at the wrist in black wool. Unlike the Norwich mitten and most modern mittens, it is knitted from the top of the fingers down to the cuff. Very little of the actual cuff exists but appears to be 6 rows of garter stitch.

I am not the world’s best knitter (understatement of the year), however I have had a go at producing an adult size pattern – several goes actually but this one seems to work.

I used double knitting wool on a set of four 4mm (UK size 8, and US size 6) needles, this knits up as a roughly 24 stitches by 30 rows to a 10 cm square. The colours I used were gold for the main colour and dark brown for the contrast. The size given here fits me; I am a UK size 7 in gloves. I have indicated below how it can be altered for larger or smaller hands. I am not a follow the pattern type knitter so the instructions may not be what you are used to.

Start the top of the thumb. 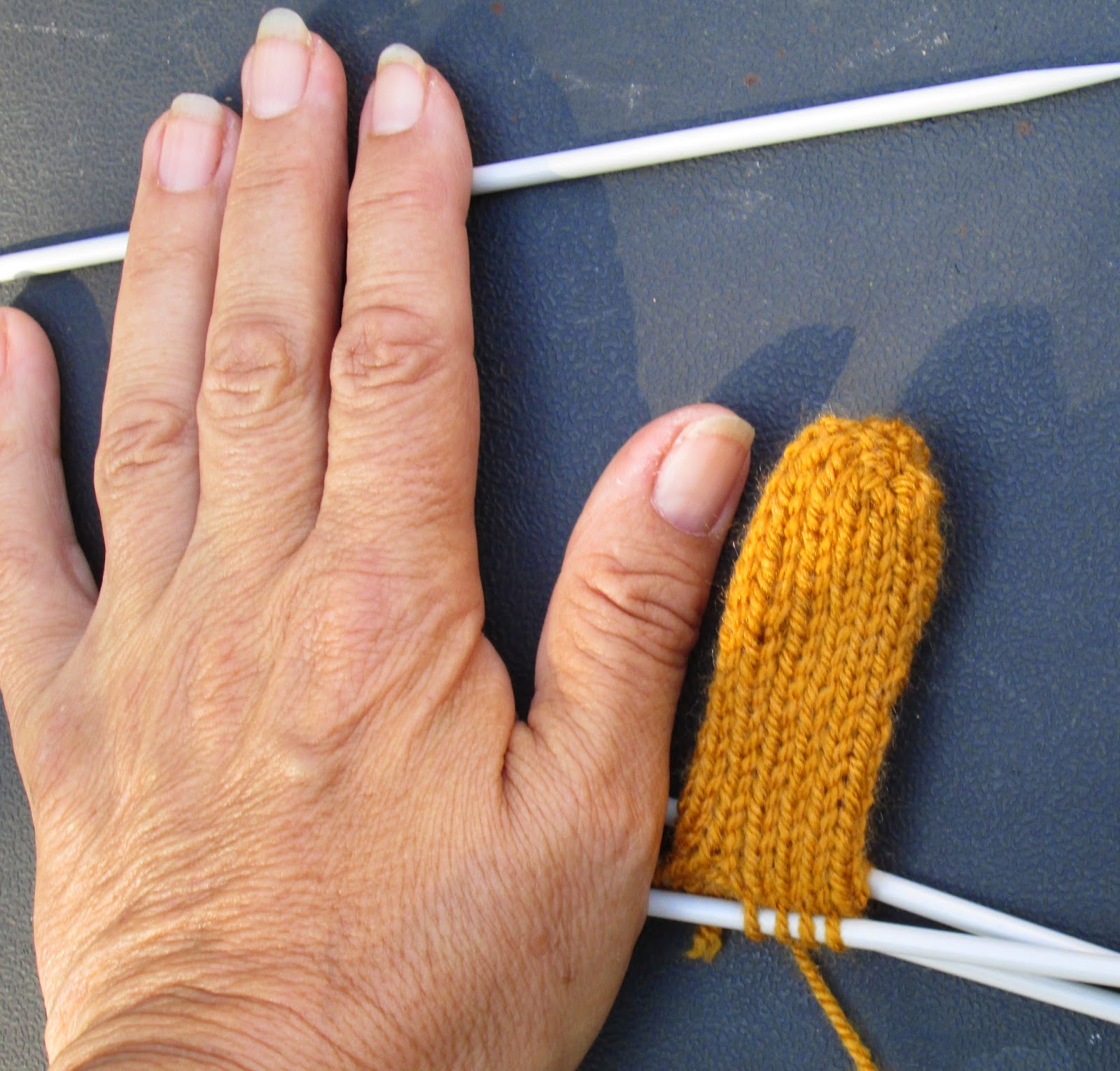 Cast on 7 stitches over three needles, leaving enough of a tail to finish off and close any hole at the end.
K round.
K1, increase 1, repeat to end of round (14 stitches on the needles – this is enough for my thumb, large thumbs may require more stitches, smaller thumbs less)
K until the thumb reaches the length of your thumb, as in the photo.
Put the stitches to keep on a length of yarn, or a stitch holder, leaving a long enough tail to graft one side of the thumb to the hand. 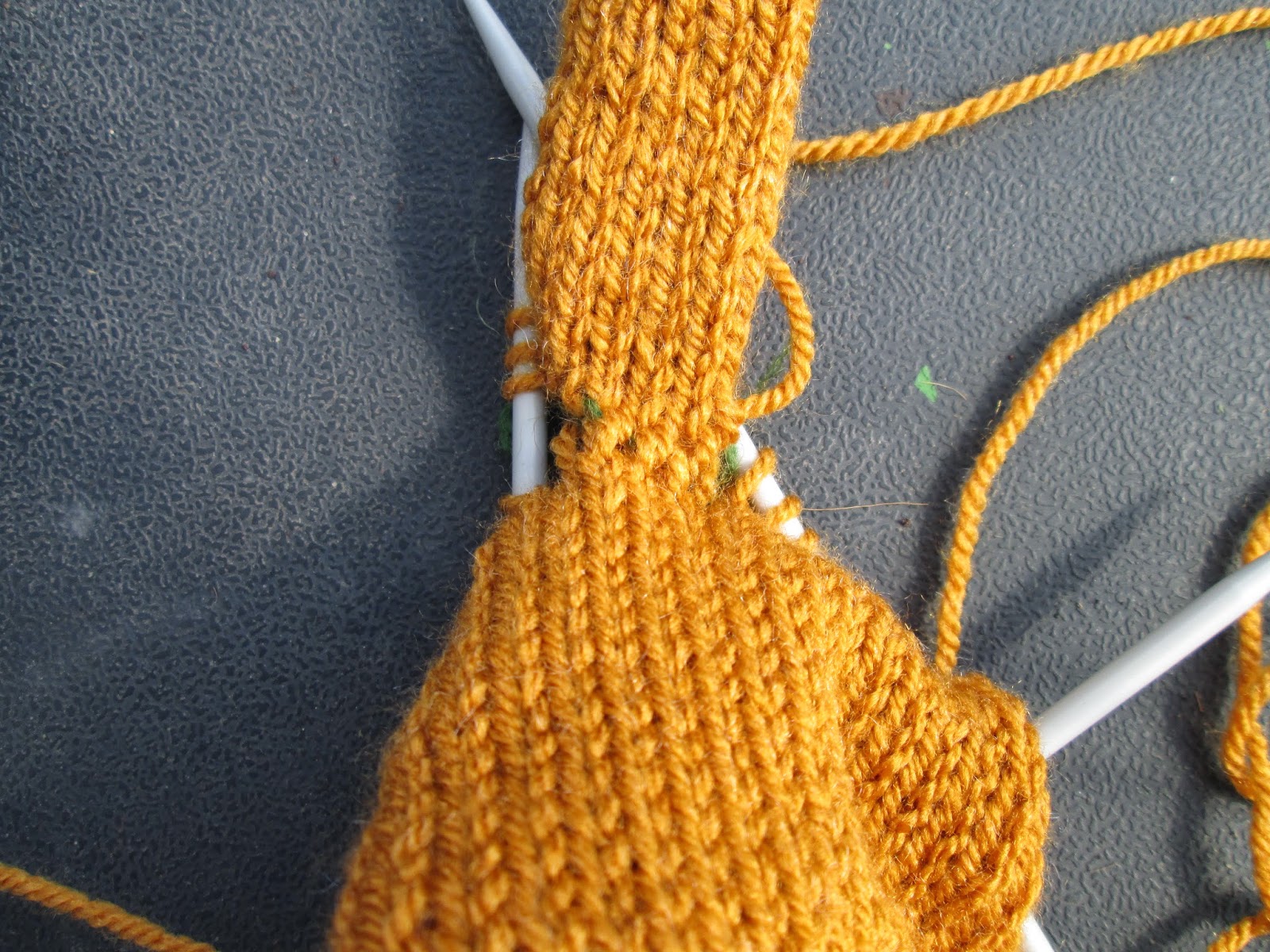 You may find it easier to graft together these stitches now, rather than at the end.
Split the remaining thumb stitches across two of the needles. This will form the outer edge of the mitten, where you will later decrease to the wrist.
You should now have 50 stitches on your needles.


K round, you may need to knit into the grafted stitches at either side of the thumb, or you will end up with a hole.
K round (you will probably have 52 stitches on your needles now), until you reach the point where the hand starts narrowing to the wrist.


Finishing
Sew up the hole at the top of the fingers and any holes at the top and bottom of the thumb.  Tidy in the ends of your contrast colour, and your cast off.