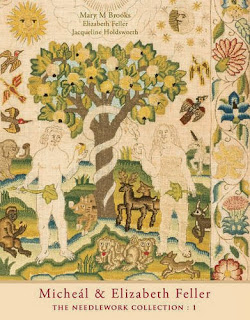 I can’t believe it has taken me two years to catch up with this sumptuously illustrated book, especially since I have another book by the same publishers which I have reviewed on here.


Micheal and Elizabeth Feller are collectors of needlework, and this first volume of their collection covers mainly seventeenth century items.  Volume 2 published in 2012 covers the later items in the collection.  The book is extremely well illustrated with lots of close ups and details, and is divided into three parts.
The first part, pages 1-124 entitled the early English works, is authored by Mary M. Brooks and covers a wide range of seventeenth century needlework items including panels, mirror frames, book covers, boxes, cushions, small bags, gloves, coifs and forehead cloths and men’s caps. These items are in a range of embroidery techniques typical of the seventeenth century, from raised work to beadwork, and from blackwork to petit point.
The second part, authored by the collector Elizabeth Feller is entitled other times other places. This is only 20 pages long and covers as it says some European and later examples in the collection.
The final part, by Jacqueline Holdsworth covers the early samplers, these are all seventeenth century, and include all styles: band and spot, whitework and polychrome. The inside of the dust cover of the book is a charted design for a reproduction of a 1687 sampler by Dorothy Ward that is in the collection.


Several pages from the book are available as a preview at http://www.needleprintsociety.com/Christmas%20Feller%20Collection.html and give a good idea of the layout with each item in the collection having a photograph of the whole item, photographs of one or two details, and an explanatory text.