Exhibition and Book Review - In Fine Style: The Art of Tudor and Stuart Fashion 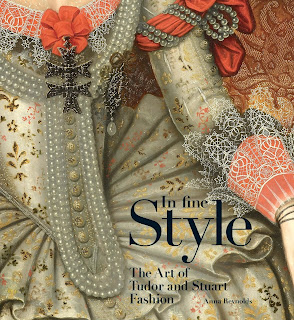 
I went to this exhibition last weekend having purchased the book almost as soon as it was published, and the first thing to say to anyone interested in clothes is that the exhibition is almost entirely about the paintings, as the  Telegraph review stated,   “there are just enough (but not too many) actual garments on display.” Sadly for me I thought that there were not enough actual garments, however that reveals my predilections. It is a large exhibition covering several rooms, with stunning paintings and some sumptuous clothing.


The rooms are divided into themes, but start with a chronology of fashion. This section includes some iconic paintings that most people know; Henry VIII looking just like Robert Shaw in Man for All Seasons, Elizabeth as a princess hanging next to her sister Mary Tudor, and later on the triple portrait of Charles I by Van Dyck. To aid those who have little understanding of period costume there are interpretation boards by Michael Parry each representing a decade and with a drawing of a man and a woman with the names given to items of clothing labelled, so for the 1540s they indicate what is an aiget, gable hood, forepart, codpiece, etc.


The portraits are not all of royalty, and they are not all English. The Dutch provide several genre paintings such as Schalcken’s The Game of “Lady Come into the Garden”, a 17th century equivalent of strip poker! They also provide some absolute classics such as Rembrandt’s Agatha Bas, and Bronzino’s Lady in Green.


But what about real clothes. There is a section on children, which includes the famous Van Dyck portrait of Charles I’s first three children, next to it you will find a lovely child’s cap and forehead cloth, originally associated with Charles I but the lace is later, c. 1700. The Gallery has borrowed a lot a lace from the Bowes Museum’s Blackborne Collection, there is one particularly stunning 1630s collar of needlelace. One room has three items down the centre. There is a 1650s bodice borrowed from the Museum of London and displayed close to the painting of Charles II dancing at a ball which shows several women wearing similar bodices. An embroidered ladies waistcoat, borrowed from the Fashion Museum Bath, is echoed by portraits of two women wearing embroidered bodices. One portrait of an unknown woman from an Unknown British painter of the 1620s, does not conform to the usual scrolling designs of the actual garment, the other which also of an unknown woman does have a scrolling design. The third garment in this room is a man’s doublet from the 1620s associated with Charles I. Later in a war themed section they have two sets of armour (not actually garments I suppose) and a buff coat, again associated with Charles I though it looks very plain, that has recently been accepted in lieu of inheritance tax.There are also a pair of gloves associated with James I, and pair of green silk stockings belonging to William III, and Henrietta Maria's slippers.


Worth going to, but somehow it did not come up to my expectations. In part this may be due to the fact that I had the book before I went to the exhibition, and the book contains photographs of many original garments that are not in the exhibition, the Verney family garments from Claydon House, the late 17th century manuta from the Met, the white silk bodice from the V&A, among many others. The book is beautifully illustrated and has lots of close ups. Well worth the price.
Posted by Pat Poppy at 18:48