Origins
The term muff does not appear in English until the last quarter of the 16th century, and the OED gives its probable origins as from the Middle Dutch, mof and moffel or the Middle French moufle. Cunnington comments that earlier these were called snufskin, snowskin and skimskyn, the term snuffskin is used by Cotgrave in his definition of the French word contenance, “one of their snuffskins or muffes, so called in times past.” Harrison wrote that muffs, together with masks, fans and wigs were, “first devised and used in Italy by Curtezans, and from thence brought into France and there received of the best sort for gallant ornaments, & from thence came into England about the time of the Massacar in Paris.” The reference is to the 1572 Bartholomew’s Day Massacre.


Sixteenth century
Queen Elizabeth I’s skinners appear to have made muffs for her, though they are in the records as snuffskyns. Adam Bland was paid for muffs, in 1583 for “furring of a snufskyn of heare colour satten embrauderid with three blake jennet skins”, and in 1585 for “furring of a snufskyn of blake velat furred with fower grey skinnes and edged with one luzarne skynne.”   Arnold gives jennet as a type of civet cat and luzarne as lynx, she quotes from Minsheu that “Lucerns... the bigness of a wolfe...mayle like a cat...bred in Muscovie and Russia” and “Genets...a beast... of the nature of a cat...the blacke the more pretious furre, having blacke spots upon it hardly to be seen.” There is an excellent illustration of a muff in the portrait of Eleanor Verney (Mrs William Palmer) painted around 1585-90, it is lined with some russet coloured fur and the outer is heavily embroidered with pearls in a design Arnold believes to be from Whitney’s A choice of emblems, published in 1586. Another example of an Elizabethan muff can be seen on the lower picture in this valance from the Victoria and Albert Museum.


Seventeenth century
By the seventeenth century the fashion for muffs was extremely well established in England, and they were worn not only by women, but by men. Prince Henry’s Wardrobe accounts record he had a least two, “Embroidering two muffs, viz. one of cloth of silver embroidered with purls, plates and Venice twists of silver and gold; the other black satten embroidered, with black silk and bugles, viz. for one £7, the other 60s” . After the Restoration Pepys used a muff saying, “This day I first did wear a muffe, being my wife’s last year’s muffe, and now I have bought her a new one, this serves me very well.”  He also bought himself one at the Old Exchange in February 1665/6, and gave another to his mother pretending that it was from his wife.  Ribeiro comments on Anthony Woods 1663 diatribe on the “strange effeminate age when men strive to imitate women in their apparel,” listing muffs among the examples of this and stating that even the king’s soldiers wore muffs, though it seems unlikely.


Fashionable women used muffs throughout the cold seasons, of the 26 plates of Englishwomen published in Hollar’s 1640 Ornatus Muliebris, no less than seven are carrying muffs, six of which appear to have exteriors entirely of fur, and in his four seasons of 1644 both spring and winter of the three-quarter length figures have a muff. As can be seen from the three illustrations which are shown here, Hollar liked drawing muffs. A wide range of furs were used for them, and James Smith in 1658 extolled the English rabbit over the foreign sable, “Here is an English conny furr, Rushia hath no such stuffe, Which for to keep your fingers warme, Excells your sable muffe.” 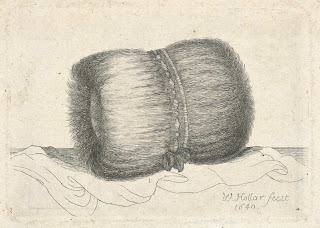 By the end of the seventeenth century muffs were still around, but not as common as previously, and they had reduced considerably in size. The Spectator in 1711 commented that, “Last year’s little muffs had straggled into these parts (the country) and all the women of fashion were cutting their old muffs in two.”