I said when I first published this that it was taken from my notes of Beatrix Nutz talk. Beatrix has been kind enough to feed back to me that there were some things wrong with my comments, and therefore I have altered them so that, hopefully, you now have the correct information.

We have all seen the newspaper reports about these finds, for example by Hilary Davidson (of the Museum of London) in the Guardian, and perhaps read the article by Beatrix in BBC History, and certainly they have created a lot of discussions on various web groups.


Beatrix started by talking about the castle itself. Between 1480 and 1507 it was owned by Virgil von Graben, who decided to extend the castle by adding a second floor. The room on the second floor, under whose floorboards the finds were found, is in the same wing as the chapel which was consecrated on the 13th October 1485, so presumably the work was finished by then. The room, on the first floor, was vaulted so that putting a flat floor above it created considerable voids which were then filled with this mainly organic material. Beatrix speculated that because they were adding a new floor they may just have dumped everything that was in the attics in there.


The finds consisted of 2,700 single fragments of linen and to a lesser extent wool. These included fragments representing 17 shirts, textile buttons, linen linings from dresses, one with fragments of the blue wool outer attached, a non ferrous metal dress hook, some baby clothes, a coif, a straw hat, fragments of finger loop braiding, a complete pair of underpants and the now famous “bras.” There were also between 800 and 1,000 fragments of shoes, and 12 complete shoes.


I think partly because of the controversy many of the pieces have been carbon dated. This gave a series of dates the earliest possible date being 1390 and the latest 1590. When carbon dating each item is given a range, so one item was 1410 to 1520, and another 1440 to 1590, however we know the floor was in place by 1485 so this gives us a probable terminus ante quem.


I actually found the coif quite interesting as there has been much discussion of coifs in 17th century circles. This coif was simply a rectangle of fabric with two corners tied in a knot at the back; the knot was still in place. I experimented with this at home in the three photos below, I think I made my rectangle too long, but you get the general idea. Beatrix has now informed me that I do indeed have it too large, the original is 47cm long and about 25 cm wide. The width has had to be estimated because of the knot.


Other things Beatrix pointed out. There was a fragment of clothing with eyelet holes and along the outer edge, to stop the eyelets tearing out, a piece of braid. There was a piece of fingerloop braid, 15 cm long with the loops still at both ends, and three patterns along its length, so obviously a practice piece. The underpants were also discussed, the linen was 11-12 threads per cm, but it was also patched with three patches, two with 12-14 threads per cm and the other 18 threads per cm. Beatrix said it had also been tested for DNA to see if it had been used by a man or a woman, but unfortunately the only DNA on it was her own.


Now to the bras. Beatrix has obviously been researching the use of these as she had found several quotes which I wasn’t quick enough to take down. There was one from the 13th century Roman de la Rose, one from Henri de Mondeville’s Cyrugia of c.1306-1320, one from Eustache Deschamps (c1346-1406) Balade sur les femmes qui troussent leur tetins (ballad on women who truss their breasts) and, one I did manage to get down, from Konrad Stolle’s Chronicle of Thuringia and Erfurt of 1480, which gave the title to the paper. “..and their shirts had bags into which they put their breasts – all indecent.”


If you follow the link above to the BBC article you will find photographs of the “long line style” with eyelet holes at the side for lacing, this and the underpants also appear in photographs in Beatrix’s project notes on the University of Innsbruck site.   The BBC site also has a photograph of the bra with needlelace in the shoulder straps, and a sprang insert between the cups. The sprang was worked on  120 warp threads, and there is evidence of a least one repair.

Beatrix has an article coming out in the next issue of Archaeological Textiles Review, and is going to write her own short report on the MEDATS meeting
These are my notes on her talk which was given at :
Well worn weeds: underclothes, linens and vegetable fibres worn next to the body. The MEDATS (Medieval Dress and Textile Society) meeting at the British Museum 27th October 2012.
Many thanks again to Beatrix for being kind enough to correct my errors 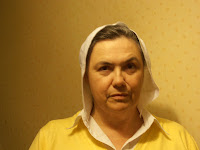 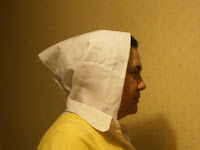 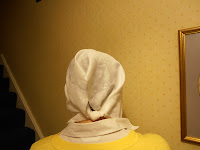