Honiton lace in the first half of the 17th century 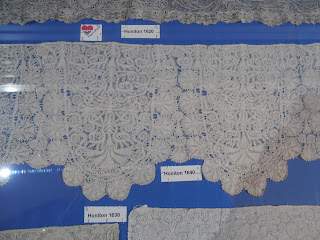 Today I visited the Allhallows Museum in Honiton. At first glance there may not appear to be much early lace, but open the drawers and there is a treasure trove.
For those who are unaware Honiton was for centuries one of the lace making centres of England. Nowadays when people refer to Honiton lace they usually mean the style of lace that Honiton was best known for in the nineteenth century, what Earnshaw describes as a non-continuous bobbin lace in which the toile (that is the motifs or solid parts of the design) are then kept in place with brides or a ground. Queen Victoria was a great supporter of the Honiton industry, and the lace for her wedding dress was “Honiton” though it was actually made ten miles away in Beer. The lace consisted of a flounce, which Victoria used on several other occasions over other dresses, and a collar and trimming to the sleeve which can be seen on the Historic Royal Palaces website. 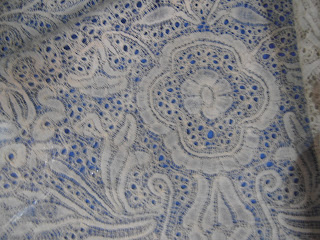 The earliest documented evidence of lace being made at Honiton is a tombstone which reads “Here lieth ye body of James Rodge of Honiton in ye county of Devonshire (bonelace siller hath given unto the poore of Honiton pishe the benefit of 100L for ever) who deceased ye 27 of July AD 1617. Remember the poore. For a bone (bobbin) lace seller, that is a man who gave out thread to be made into bobbin lace and then collected the lace from the makers for onward sale, to be rich enough to give £100 to the poor seems to show that the trade was well established.
Thomas Fuller in his Worthies wrote that, “much of this (bobbin lace) is made in and about Honyton and weekly returned to London...(it is) not expensive of bullion like other lace, costing nothing save a little thread descanted on by art and industry...”  Although Fuller’s Worthies was published after his death in 1661 it was written earlier, and Fuller was vicar of Broadwindsor, only twenty miles from Honiton, from 1635 to 1640. 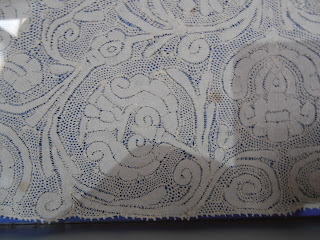 What this early Honiton lace looked like is, as Levey says, largely a matter of conjecture. Levey considers that the collar in the collection of the Victoria and Albert Museum is English lace and probably Honiton.  It looks similar to the laces shown here that are in the Allhallows collection. Unfortunately they had to be photgraphed through glass and therefore there are some reflections and some shadows. I recommend the museum if you are into lace, these are from one draw. There are also 18th, 19th and 20th century Honiton laces on display, as well as some fine late 17th century needle laces.
1. Earnshaw, Pat. The identification of lace. Aylesbury : Shire, 1980.
2. —. A dictionary of lace. Aylesbury : Shire, 1982. 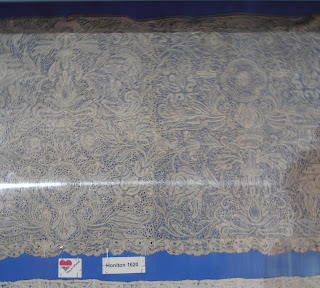